december 12, 2017, 10:11
Theater
Authors: eng.lsm.lv (Latvian Public Broadcasting), Māra Rozenberga (Latvijas Radio Ziņu dienesta korespondente)
One of Latvia's most renowned cultural institutions has found a temporary new home. The only problem is it's not a very comfortable or practical one.

The New Riga Theater (JRT) is well known as a hotbed of high-quality and cutting-edge drama. It has gained an international reputation under the leadership of artistic director Alvis Hermanis.

For the next couple of years it has relocated to new premises, known as the Tobacco Factory, on Miera iela, in honor of its former use, and numerous changes were made to convert the building for use as a theater.

However, according to JRT technical director Ainis Grinbergs, much of the work done has been of poor quality or puzzlingly pointless, leading him to characterize the process of moving premises as "a nightmare".

Latvian Radio's culture correspondent Mara Rozenberga meets Grinbergs in the temporary premises of the New Riga Theater Administration - a two-storey wooden house next to the Tobacco Factory. From the basement there comes a nasty sewerage smell. Just recently, several months after the theater opened, the owner of the building, the State Property Agency (VNI), started to install a ventilation system. Maybe it will get rid of the stink, Ainis hopes.

The building of the Tobacco Factory also appeared in the news headlines because of the absurdity of construction planning, which actors and theater technicians now battle on a daily basis.

One corridor (below) appears to be something from a Hall of Mirrors at the fairground, featuring a strikingly narrow passageway. 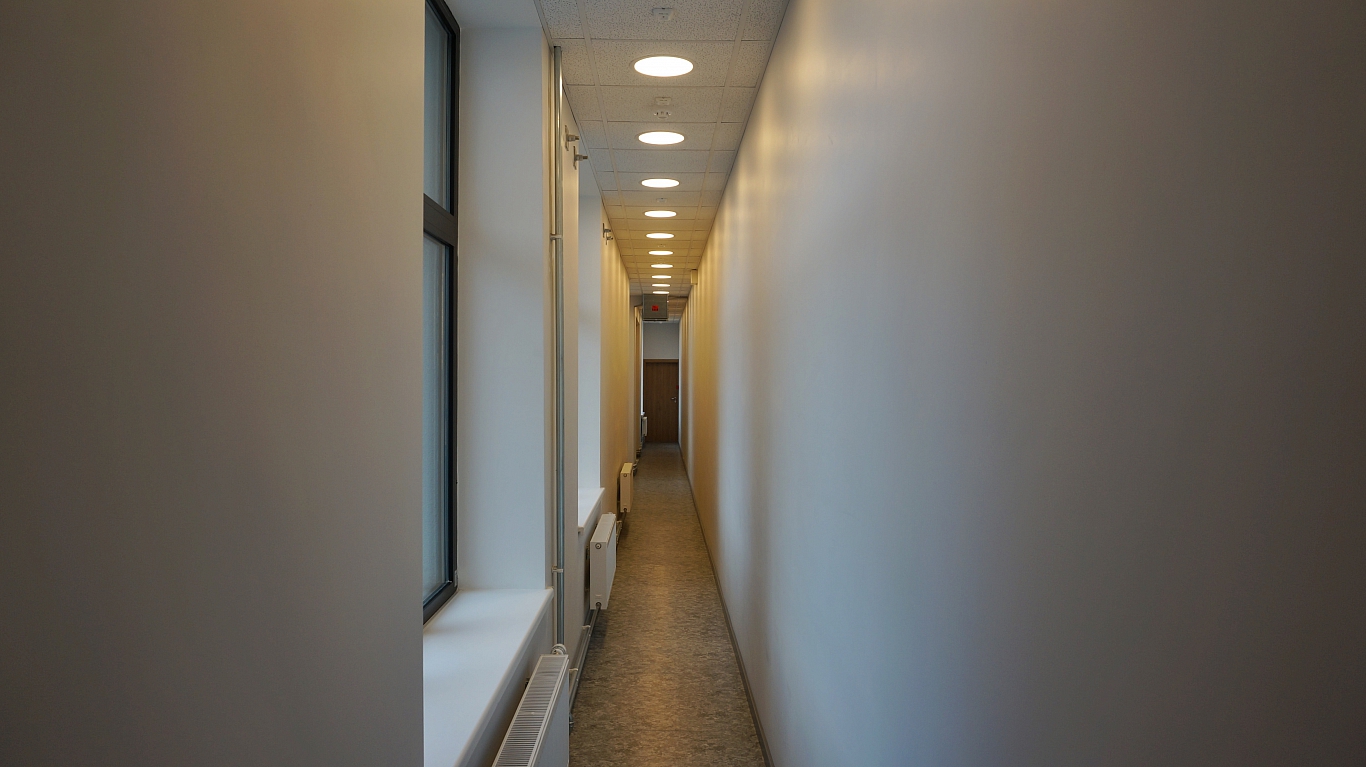 Other parts make the temporary nature of the renovation all too obvious. 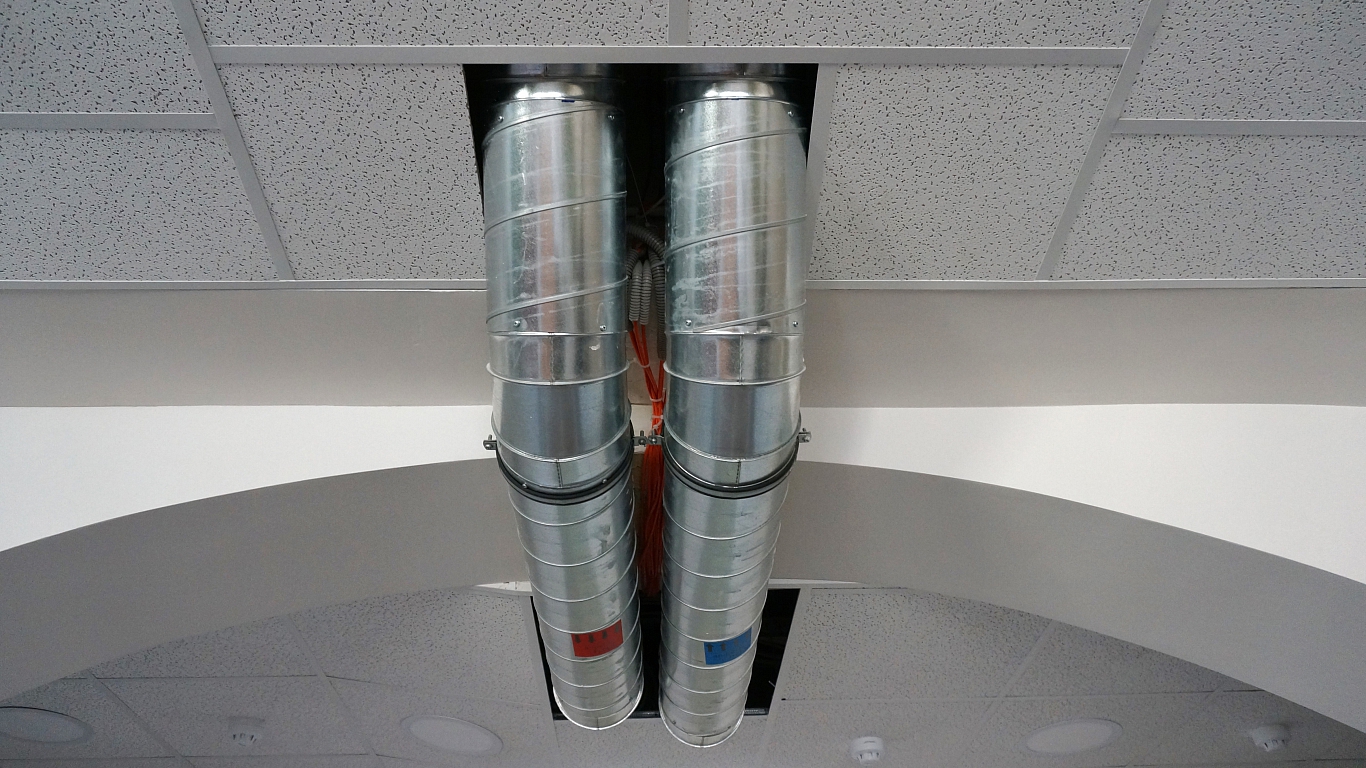 The elevator, which takes theater-goers to the upper seats, has got stuck twice since September, giving a new meaning to the term "captive audience".

While that is only an occasional problem, actors in the backstage areas are faced with a more permanent problem: a lack of toilets.

"Here we are backstage. Actors need a toilet. What do they do? They run like this!"

Ainis sprints along hallway to the stairs. Two floors down is the necessary facility. And then all the way back. During a play, between scenes, this is quite a performance in itself. Although the theater has repeatedly asked designers to install a toilet near the stage, it has not been done.

Baiba Broka, an award-winning actress, has a suggestion: "An organic toilet could be set up," she said.

"That's what we thought of, but without ventilation, all of that smell will escape as biology does its thing. Then the whole house will stink again. There is nowhere else for it to go," explained Grinbergs.

Another problem is a lack of speakers in the dressing rooms so actors can follow what's happening onstage and not miss their cues. Though these are promised soon, Grinbergs says they appear to have been left out of the plans as an economy measure.

"As far as I understand, it saved some money. These people who did the building work... Well, how many theaters in Latvia have been built and rebuilt? They just do not know what the priorities are," says the JRT Technical Director.

The problems do not end there. Because the JRT is only a temporary tenant, no alterations to the building and its fixtures and fittings can be made unless with the express permission of State Property Agency and using its approved workers. This can extend even to the replacement of lightbulbs and fuses, of which theaters are not in short supply.

This summer was the most stressful in 22 years at JRT, says Grinbergs. After receiving a go-ahead to transfer the set construction workshop to the Tobacco Factory, the department arrived in July only to discover there was nowhere to put tools. They lay in a courtyard for two months under a tarpaulin, gathering rust.

The old premises on Lāčplēša street had plenty of problems of their own - including a reputation for stifling temperatures in the auditorium - hence the move while an extensive renovation takes place.

"On Lačplēša Street, the problems were not as big as here [at the Tobacco Factory]," says Grinbergs, looking forward to the day JRT returns to its permanent home.