"The Bank is also subject to a number of legal obligations, including the submission to the FKTK, within the specified timeframe, [of] an action plan for addressing breaches and shortcomings identified and carrying out an independent review of internal control system," the regulator said.

The exact amount of the fine is 1,556,046 euros. In its statement headline, the regulator rounded this up to 1.6 million.

The decision was made by the regulator a week ago on November 29 but was kept under wraps, and in its explanation of its decision, FKTK said the inspection upon which the decision was taken dates back to 2018. No explanation for the delay in either case was provided.

"In 2018 the FKTK carried out an on-site inspection of the Bank, as well as a targeted inspection, during which the FCMC identified that the Bank's internal control system does not fully comply to the regulatory requirements governing the prevention of money laundering and terrorism and proliferation financing (hereinafter – AML/CTPF)," the FKTK said.

"The Bank had not established an adequate internal control system to meet its risks in the field of prevention of money laundering and terrorism and proliferation financing, which would ensure effective compliance with the regulatory requirements," it added, explaning that "in several cases" the bank had not taken sufficient measures to make certain that a beneficial owner indicated was the beneficial owner; had not obtained documentation and had not taken necessary measures to make certain of the origin of financial means in its customer accounts and had not documented conclusions; had not ensured appropriate and high-quality enhanced customer due diligence; had not duly decided on termination of business relationships with customers and, in a particularly damning comment "had not paid sufficient and special attention to untypical large, complex, inter-related transactions with no apparent economic purpose or clear legal purpose."

"In view of above, it is concluded that the Bank has not ensured the effective functioning of the internal control system in the field of the prevention of money laundering and terrorism and proliferation financing in a way that its activities comply with the AML/CTPF regulatory requirements," it concluded. 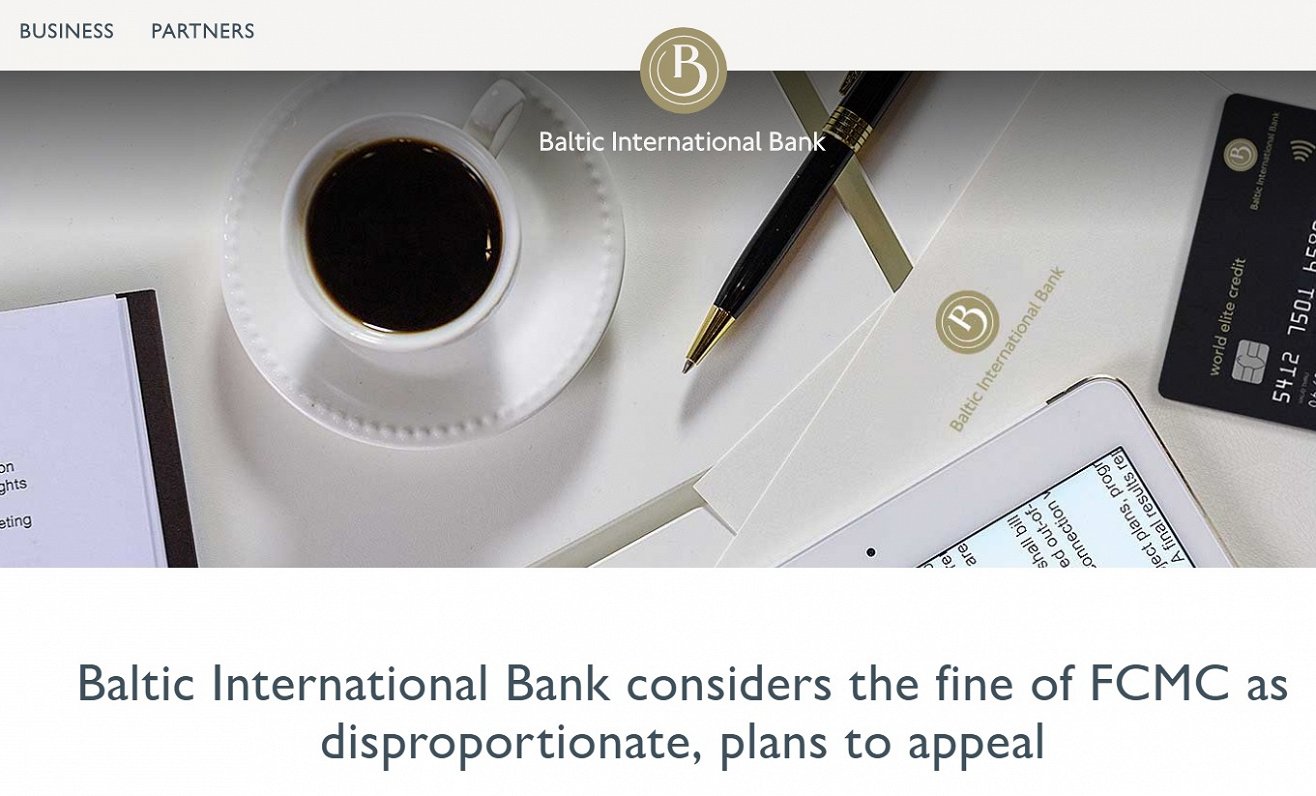 The amount of the fine imposed is 90% of the maximum statutory amount, 10% of the Bank’s total annual turnover. The fine must be paid into the State budget within one month. BIB was previously fined in 2016, too, also for
infringements of the AML/CTPF regulatory requirements, and received a trifling fine earlier this year for missing its accounting deadline.

In May this year the bank boasted that "Sigma Ratings, a New York-based rating agency, assigned BBB+ financial crime compliance (FCC) rating to Baltic International Bank placing it among industry leaders." It also published an interview with Joseph Cofer Black, a former CIA official on the bank's board in which he also said the bank was on top of money laundering concerns.

Soon after the FKTK penalty was announced, BIB said it disagreed with the decision and would appeal. In a tersely worded statement it said:

"Baltic International Bank considers the administrative fine imposed by the FKTK and reproach about deficiencies in the internal control systems during the period from 2014 as disproportionate. FKTK started the investigation process in the Bank two years ago – in the beginning of 2018. It included the period from 2014, when the control of the customers and transactions were determined by the laws and regulations that are drastically different from the current. Bank considers that it’s arguments were not heard and listened to in essence during the period of almost two years.

"[The]Bank has achieved a lot in the strengthening of its ICS and expects a fair decision of regulator, not to permit the situation that year’s old supervision and control is measured with the today’s standards, although drastically different banking laws and regulations were valid during this period, several years ago," BIB said, insisting it had "performed all required tests, customer control, [and] closed accounts of unsuitable customers."