march 23, 9:26
Banks
Authors: eng.lsm.lv (Latvian Public Broadcasting)
Swedbank, the largest retail bank in the Baltic states, has published a report by law firm Clifford Chance, which the bank hired in February 2019 to conduct an investigation of Swedbank’s anti-money laundering work. Swedbank has now made the report available at www.swedbank.com.

The investigation includes customers, transactions and activities from 2007 through March 2019 and how the bank has handled internal and external information disclosures.

“Clifford Chance’s report confirms the bank’s failure. In its anti-money laundering work, the bank has not measured up to the requirements that customers, owners and society are entitled to set. We now have the facts and are working hard to solve the problems”, said Swedbank’s Chairman Göran Persson.

The report shows that during the period 2014 – 2019 transactions representing a high risk for money laundering were made in the form of payments to customer accounts worth EUR 17.8 billion and payments from customer accounts worth EUR 18.9 billion in the Baltic subsidiaries. However, Clifford Chance could not conclude that money laundering had definitely taken place.

High-risk customers in Baltic Banking were allowed to open accounts in the bank’s other business areas in Sweden – Swedish Banking and LC&I. Clifford Chance further notes that all of these customers have been offboarded.

The report also notes that during the time regulators started to clamp down on the banks, these high risk customers started to disappear. 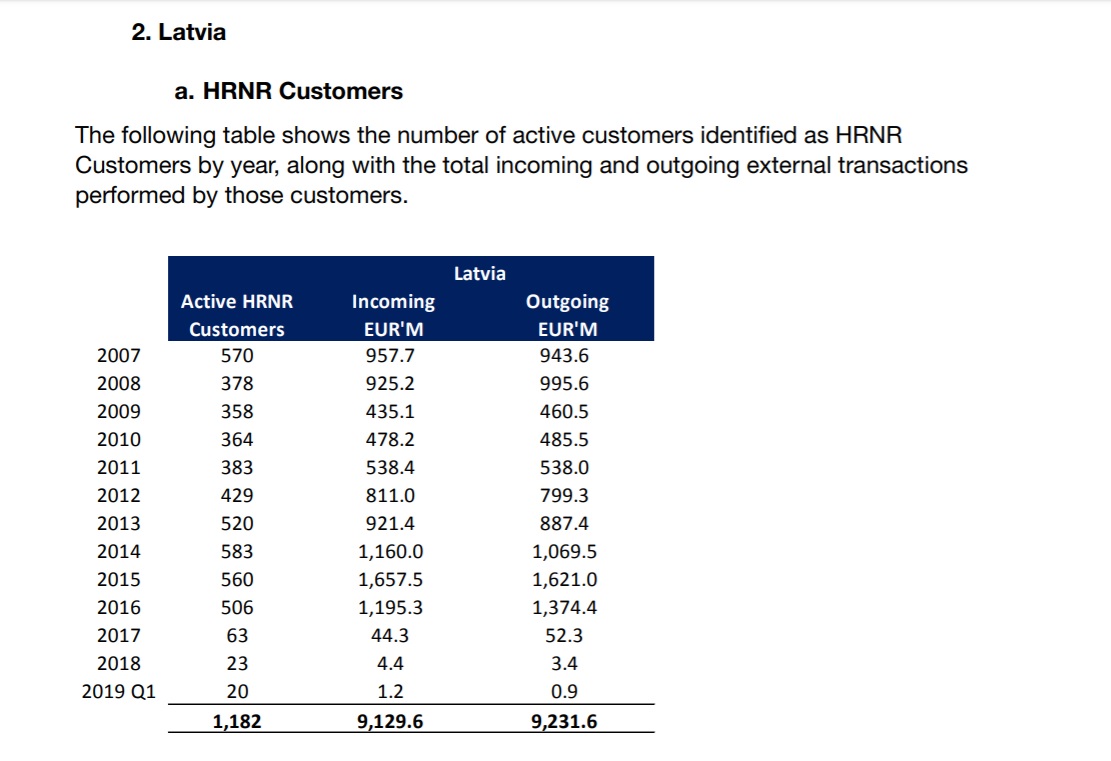 There are also some interesting forensic details about the methods used by these high-risk customers - including the operation of accounts in Swedbank Latvia apparently from occupied Crimea and Iran.

However none of these Subject Transactions involved any OFAC-listed [sanctioned] persons, and nearly all of them, by volume and value, occurred prior to 2017, the report notes.

Clifford Chance writes that during the period 2007 – 2019, the bank’s senior management failed to establish clear lines of AML-related responsibilities and that Swedbank’s CEO’s throughout the review period all had a lack of adequate appreciation for the risk posed by the high-risk non-resident customers to the bank. Furthermore, Clifford Chance considers certain statements during October 2018 and February 2019 concerning money laundering, were inaccurate or presented without sufficient context.

The bank also seems to have been somewhat less than fully transparent with regulators, too.

"The Investigation found that, in certain instances, Swedbank did not always take an actively transparent posture with regulators regarding AML-related issues, de-emphasized negative information and occasionally employed a narrow or literal reading of certain requests," the report says.

“It is obvious that there have been cultures in the bank that are not acceptable. This is serious. I have initiated a review which aims to examine the culture and identify actions needed. This work is under way”, said Swedbank’s President and CEO Jens Henriksson.

On March 20, Swedbank was fined 360 million euros by the financial authorities in Estonia.