may 30, 2018, 9:19
Banks
Authors: Mike Collier (eng.lsm.lv chief editor )
Marshall Billingslea, the Assistant Secretary for Terrorist Financing at the United States Department of Treasury, was recently in Rīga and is clearly keeping a keen eye on developments in the Latvian banking sector following the collapse of ABLV bank and subsequent efforts to clean up the sector and shed the country's image as a global money-laundering hub.

On May 29 he gave an interview to LSM stressing the need to continue those efforts into the future, particularly via a more effective and powerful role for Ilze Znotiņa the new head of Latvia's dedicated anti-money laundering bureau.

Among his other points was a strong assertion that cleaning up the banking sector is a matter of national security as much as financial prudence and that NATO allies have clear duties to each other in this regard. You can read a transcript of the interview below. 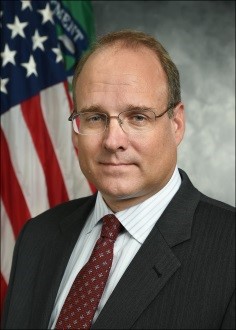 “The U.S. and Latvia are close NATO allies. We stand with the government as it is moving to clean up a very difficult situation that has been accreted over several decades – poor policies, lax oversight and weak enforcement. In fact the government is coping with a banking sector that was specifically designed to attract non-resident deposits and offshore accounts, and that has led to the situation Latvia finds itself in, which is that it has a banking sector that remains one of the most vulnerable in Europe.

It has a banking sector that has a history of exploitation by organized crime, by foreign governments that are hostile to NATO and outright corruption in society.

“We very much welcome the attention and the emphasis that has been placed by the Prime Minister and his team – especially the Finance Minister – on resolving these challenges.

Marshall Billingslea on Latvia's banking reformsMike Collier/LSM00:00 / 00:00
We view that the recent enactment of the law on shell companies is an excellent first step, but it is only a first step and there are a number of other specific measures that have already been outlined by the Latvian government that need to be rapidly enacted as well. In particular we are watching very closely, and look forward to welcoming to Washington the new head of financial intelligence [Ilze Znotina of the Kontroles dienests] and we are optimistic that she will be given the resources and the authority she needs to effectively conduct her mission.

LSM: You said that historically problems have been lax oversight and weak enforcement. Are you satisfied that oversight is now less lax and enforcement is tougher? Last week we had another bank fined by the Financial and Capital Market Commission (FCMC) but it was fined by agreement. If we're really cracking down wouldn't it simply be better to tell them what they must pay rather than negotiate it with them?

“I'm not privy to the details of that negotiation but these types of measures are subject to internal discussions in the U.S. as well, so I don't view that as out of the ordinary. We have observed that the FCMC should be authorized to levy steeper penalties when necessary. That's been one of the issues we've observed in the past. I will say we hosted the FCMC team here in Washington last week and had a very productive set of discussions on a number of enforcement actions they are dealing with in the sector and we look forward to seeing FCMC step forward and assume direct responsibility for its enforcement role going forward.

LSM: Are you expecting to see more cases brought to court regarding sanctions busting and money-laundering?

“One of the main measures of effectiveness of any AMLFC [Anti-Money Laundering and Financial Crimes] regime is the extent to which prosecutions are mounted for money laundering and other illicit financial activities and the extent to which there are effective prosecutions. This is certainly something that is being watched very closely by Moneyval, which is the financial action task force regional body for Europe and the Moneyval peer-review process of Latvia began back in May 2017 and we're expecting that the evaluation will be presented in July this year at the Moneyval plenary. This matter of enforcement and successful prosecution will, I'm sure, be a topic of discussion.

LSM: You can't comment on the ABLV case but what sort of discussions were taking place before the Treasury went public with the allegations against ABLV, because it seems this was doen in a very public way to send a very obvious message. Was it a sense of frustration that you had been trying to tackle this for months or years and nothing had happened?

“I can't comment on any particulars but when the United States becomes convinced that we must take action to protect both our financial system and the international financial system, we will not hesitate to do so.

We very much desire to see that allied partner nations take effective actions on their own to resolve the issue, but if that becomes not possible or we lose confidence in the process then we will certainly take action ourselves. And that was the situation we found ourselves in.

LSM: It's been claimed that in 2013 about 1% of global dollar transactions were going via Latvia. Is that an accurate figure and is it why you took such a keen interest in Latvia, quite apart from the issues you've already mentioned about it being an allied nation?

“First and foremost, because Latvia is a close NATO ally – my personal history with Latvia goes back decades right to when they were invited into NATO – we have absolutely every ounce of determination to support our ally in this banking issue.

But make no mistake about it: it is fundamentally a national security issue. It's a security issue for Latvia itself as we see hostile actors penetrating Latvia via the banking sector. The endemic corruption gnaws away at the heart of the public sector and it's fundamentally a NATO security issue as well, if it's affecting not just Latvia but its neighbors and possibly the United States as well.

So when we see an accumulation of policies that were deliberately designed to create this kind of framework to induce this kind of banking behavior, it's a difficult challenge but it's long overdue to be addressed. We applaud the first steps taken by the government and look forward to immediately seeing all of the substantial follow-up work that's now required.

LSM: You mentioned that there's a new woman in charge of the anti-money laundering office. Would it be fair to say that until this point, that has been a weak link in the chain of AML enforcement in Latvia? What do you hope to see from her?

“Absolutely it's a significant challenge and a significant issue. She faces a steep hill to climb given the volume of non-resident banking that's still occurring in Latvia. She needs to be given both the necessary authority and the resources required to do her job. We look forward to welcoming her to Washington as soon as is practical and in the meantime we also are identifying resources for technical assistance and other forms of support to her, to FCMC and the Finance Ministry as appropriate.

LSM: Does that mean you'll be sending people over here for training, that there will be shared systems?

“We definitely are eager to send people to Latvia to help with training, to provide observations and experience in various issues that will be encountered and we also look forward to hosting Latvian officials here in Washington for further training and discussion. The quest to stamp out money-laundering is a common task between our countries. It's a formidable challenge that we all face and that's why working together as allies is so crucially important.

LSM: Finally, a lot of people here talk about the non-resident banking sector shrinking to about 5% of the banking sector as if that is a U.S. demand. It is a demand, is it the sort of level you think would be sustainable?

“We're not going to levy demands on a sovereign nation. That's not the way we work. But what we would say is that the percentages the Latvian government has identified are very consistent with the direction in which other Baltic nations such as Estonia are headed and those percentages would seem to us to reflect a prudent amount of offshore investment that can be effectively regulated given the relative size of Latvia and the relative size of its banking sector and the relative size of its enforcement apparatus. But what is essential is moving beyond the shell company legislation so that all the other priority measures – the so-called 21 or 22 measures that have been identified – these steps are also essential to the future integrity of the Latvian banking sector.”