On the road with Latvian exporters: CakeHR

july 3, 2018, 13:43
Business
Authors: Mike Collier (eng.lsm.lv chief editor )
Ķīpsala is a strange place. An island in the middle of the River Daugava directly opposite Riga Castle, it would be reasonable to expect ot to be a sort of Latvian version of the Ile-de-France in the middle of the Seine in Paris: historic buildings, exclusive apartments, eye-watering property prices. Instead it manages to squeeze a complete panorama of Latvia into just less than 200 hectares.

On The Road with CakeHR

There are beautiful wooden buildings, fully restored and serving as diplomatic residences. There are derelict wooden buildings completely unrestored and serving less elegant purposes. There is a modern technology university, a huge characterless conference hall and even a campsite. It's the sort of place where you see a Bentley parked next to a shirtless fisherman in the process of catching something for his supper. It is unlikely he owns the Bentley.

On the outside terrace of the Fabrikas Hercogs restautrant, Kaspars Upmanis and Norberts Erts also have an appetitte for fish. Kaspars, the founder of CakeHR, is cool and understated behind his Ray-bans, while Norberts, the co-founder, is all hand gestures and bursts of laughter.

Norberts explains why they have chosen Ķīpsala for our rendezvous.

“It's not because of the great view. Ķīpsala is significant because it's where Kaspars and I first met. It was summertime, warm and sunny just like today and he was visiting a friend. We hung out in the courtyard at the back of my apartment building, sipping beer. And I remember it was also the first time I sat on a fixed-gear bike and Kaspars had to explain to me how it worked! I was quite surprised when Kapsars contacted me afterwards about joining Cake!”

CakeHR is an all-in-one human resources management software product that allows employers to keep track of their employees' holidays, business trips, expenses and more. Started in 2012 it is updated weekly and has already turned CakeHR into a major gloabl player in an extremely competitive sector, being ranked 6th-best HR software in the world in a 2018 survey conducted by Gartner in the U.S.

“In principle it is simple: an e-management application so employees can book their time off and everyone can see it on a shared calendar. Now we're morphing into a full HR platform that offers everything from recuitment to offboarding and everything in between,” says Kaspars. 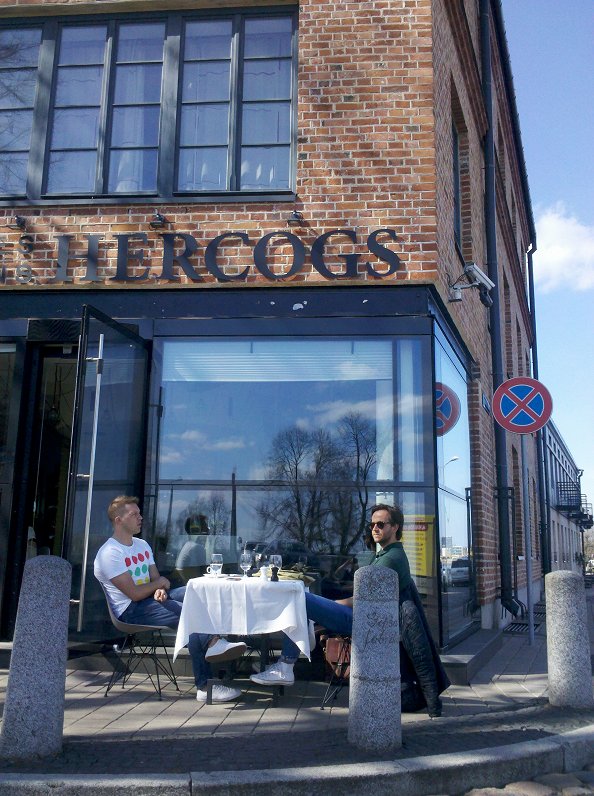 Yet as Kaspars explains as the fish soup arrives, CakeHR started as a side project: “I used to have a digital agency and we built CakeHR in-house for our own team, so everyone could schedule their vacation time. We saw it as a side product, but it started growing. The revenues kept on climbing, we expanded the features and improved things. And then I realised that the agency wasn't going to be forever and I wanted a business that would continue to grow. At a certain point the revenues of CakeHR were such it just made sense to fully focus on it.”

Getting Norberts on board in 2013 to lead what the company calls its “militant marketing department” with social media “ growth hacking” was an important step, and Norberts says he thought hard before agreeing: “There were lots of small things – not one big reason. It was a gut feeling.

I wasn't thinking 'Oh, this will be lots of money' or 'I'm in love with Kaspars'!” Norberts lets out another gale of laughter. Somewhere inside the restaurant a glass shatters.

The company is based in London, helping it attract a large portfolio of UK-based clients, but has its main office in Riga and a sales development representative in Tallinn. Exports form the overwhelming bulk of its business, though it has started picking up local clients too over the last eighteen months to supplement the international client list.

“Basically, our marketing is bringing in leads, and we now have customers in 60 countries,” says Norberts. New languages including Spanish and Russian are being added to broaden the potential market for CakeHR and the sales team is being reinforced.

With the fish soup finished, it's time to think about dessert – which prompts a question about why the company is called CakeHR.

“In the beginning it was because it was easy, as in 'a piece of cake',” smiles Kaspars, “but now perhaps it is more that it is multi-layered – also like a cake. Now we can customise your cake.”

Both men are proud that they continue to develop the company not with government handouts or the intervention of angel investors but using their own capital.

“Now this is quite a trend. Startups are being recognised not by the money they have raised but by the fact they are bootstrapped companies, resisting easy money. We operate with our own money and we are so proud of that. We risk our own money, our own salaries, and that actually helps our team to think more clearly because there isn't some big brother or big sister behind us, pushing us to perform,” says Norberts.

Kaspars nods. “When you get into the money-raising routine, there is the danger you have to just keep on raising more and more. You can't not raise. And in the end you need to sell the company for crazy money.”

As the bill is called for, Norberts admits: “There is one other reason I chose this place. Do you remember when everyone was doing the ice bucket challenge in 2014? I did it here. Look...”

He brings up a video on his mobile of slightly nervous-looking waitresses creeping up on him as he sits in a business suit precisely where we are sitting now. They dump a load of ice and water over his head to the surprise of tourists on adjacent tables, which causes him to laugh both on the video and at the table, four years later.

“But don't worry, we won't do it today,” he laughs, instead using his mobile to take a photo of the lunch bill and register it as a legitimate business expense – via CakeHR. With the company founder sitting opposite, getting it approved shouldn't be a problem.