october 24, 2018, 13:53
Economy
Authors: eng.lsm.lv (Latvian Public Broadcasting)
No-one likes taxes much, but there was a silver lining to that particular cloud October 23 with news that Latvia's tax code is rated one of the best in the world.

According to research by Tax Foundation, a Washington, U.S. based tax policy research organization, Estonia's tax code is the best among Organization for Economic Cooperation and Development (OECD) member states with Latvia's in second place.

The data supporting this is presented in the 2018 International Tax Competitiveness Index which seeks to measure the extent to which a country’s tax system adheres to two important aspects of tax policy: competitiveness and neutrality.

"A tax code that is competitive and neutral promotes sustainable economic growth and investment while raising sufficient revenue for government priorities," say the authors of the report.

According to the rankings, Latvia does very well on corporate, individual and property taxes but poorly on consumption taxes. Nevertheless it is enough to secure second spot out of 35 OECD members included in the survey, behind Estonia and ahead of New Zealand in third place. 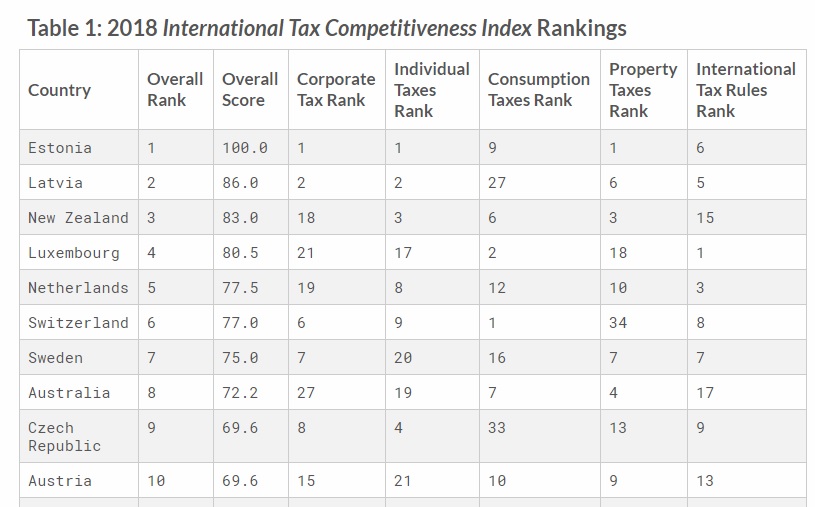 "While Estonia’s tax system is the most competitive in the OECD, the other top countries’ tax systems receive high scores due to excellence in one or more of the major tax categories. Latvia, which recently adopted the Estonian system for corporate taxation, also has a relatively efficient system for taxing labor," note the authors.

"Latvia implemented a business tax reform package that matches the competitive Estonian system. Latvia now only applies business taxes on distributed profits at a rate of 20 percent. It was already among the top five most competitive countries, and these reforms helped Latvia remain in 2nd place behind Estonia," they add.

Estonia retained top spot by instituting changes to its VAT and individual income tax. The threshold for the VAT was increased by 8.5 percent, from $28,571 to $31,020.