march 4, 10:49
Economy
Authors: eng.lsm.lv (Latvian Public Broadcasting)
Data compiled by the Central Statistical Bureau (CSB) show that in 2019 housing costs on average constituted EUR 151 per household in Latvia monthly, which is just one euro more than a year ago.

Indeed the share of housing costs in the total household expenditure declined – last year households spent on average 12.2 % of their disposable income on housing costs  as opposed to 13.4 % in 2018.

Households living in Pierīga - the districts immediately surrounding the capital city which can be considered its commuter belt - spent on average EUR 185 monthly on housing, while in Rīga itself the costs was actually lower at EUR 172.

In other regions these costs were lower still: EUR 139 in Zemgale, EUR 132 in Kurzeme, EUR 121 in Vidzeme and just EUR 104 in Latgale. Housing costs cover the average expenditure on housing during both the summer season and the winter, with its higher heating costs.

The national average costs in households renting accommodation (from individuals, local governments, etc.) constituted on average EUR 182 monthly, whereas in Riga it was considerably higher at EUR 260 monthly. 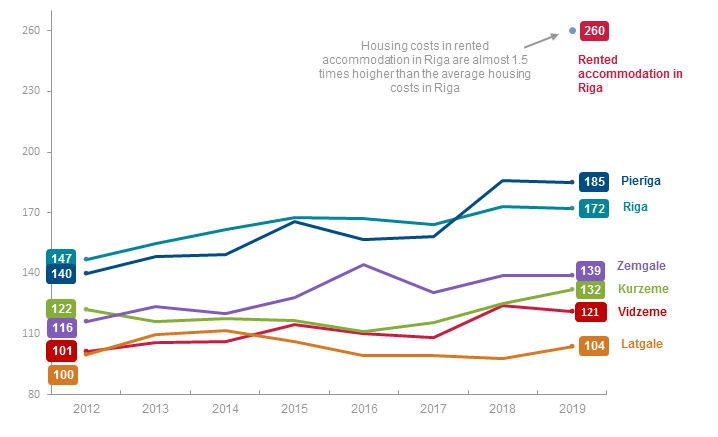 Single elderly spent one fifth of their income on housing

In households consisting of a couple housing costs varied between 10.1 % among those having one child and 11.7 % among those with two children. Couples without children spent 11.0 % of their disposable income on housing.

Last year, the largest share of households admitting that housing costs are a heavy burden was observed in Zemgale region – almost one third or 29.7 %, whereas the smallest share of such households was registered in Riga – 16.7 %.

Again, housing costs imposed a heavy burden to 39.0 % of single elderly people (aged 65 and over) and 33.0 % of single-parent families. In 2019, 8.6 % of households, due to financial difficulties, have been in arrears during the last 12 months.