In 2020, the economic accounts for agriculture show that total agricultural output in the European Union stood at €414.1 billion in basic prices, down by 1.1% compared with 2019. This information comes from final 2020 estimates on the agriculture sector published by Eurostat November 15.

While Latvia produces much less in terms of volume, it was among the best-performing countries when comparing 2020 with 2019.

The value of both EU’s crop and animal output registered decreases of 1.0% and 1.1%, respectively.

When it comes to EU agricultural input costs (intermediate consumption), there was a slight decrease of 1.1%, as compared to the previous year, which resulted in a stronger rate of decline (1.3%) in the gross value added generated by agriculture.

Latvia was also named as one of a few countries where the risk from pesticide use has risen rather than fallen. Compared with the average between the years 2011 to 2013, the risk from pesticide use is estimated to have declined by about 21 % through to 2019 (see Figure 10). During this timeframe, the risk of pesticide use declined in a clear majority of Member States, the steepest declines being in Romania (-62 %), Luxembourg (-50 %) and Denmark (-47 %). There were a few Member States, however, where the risk rose; among others, in Cyprus and Latvia the risk rose an estimated 40 % and in Estonia an estimated 49 %. 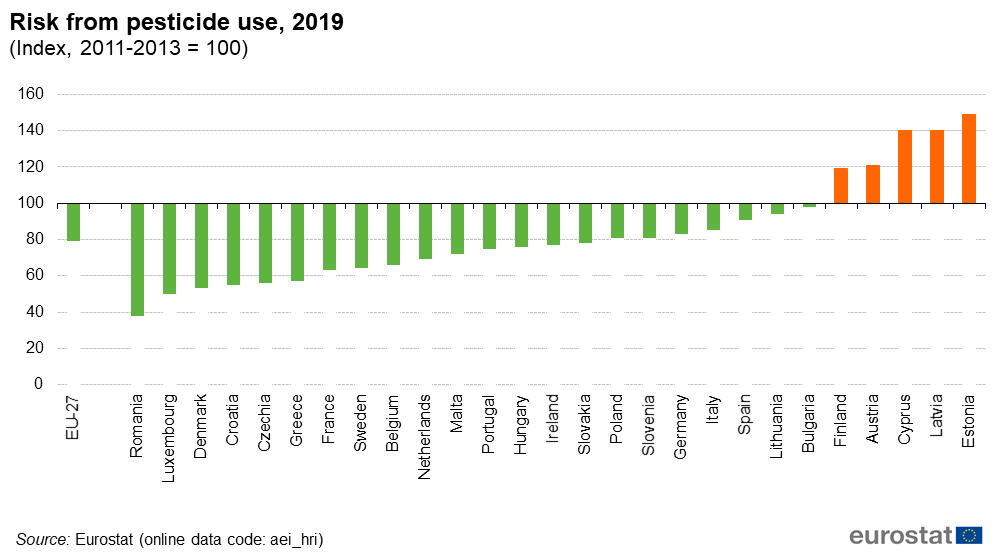