Looking at gross domestic product (GDP) figures in the Baltic States by quarter since the end of 2019, when Covid-19 had not yet reached Europe, one can see that Lithuania and Estonia did not fall as hard as Latvia in 2020. The two neighboring countries returned to the pre-crisis growth rate more quickly and were able to hold it up. 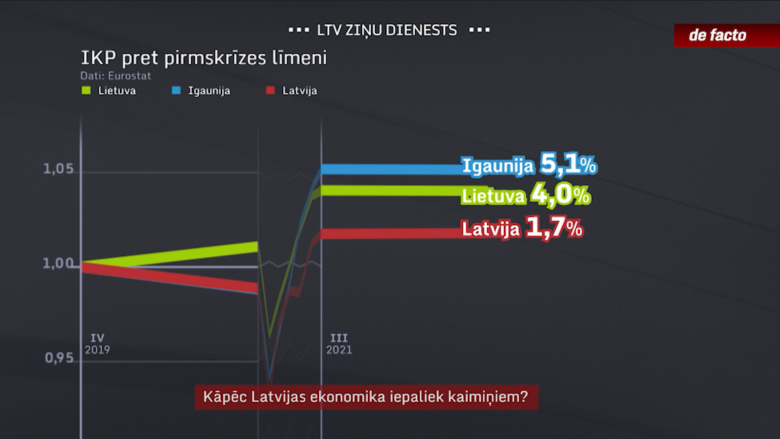 The reasons that have negatively affected Latvia's economy in recent years are both problems related to the Covid-19 crisis and its management, as well as older issues, for example, transport. Cargo transit through Latvian ports was falling before the pandemic and continued to fall. In Lithuania and Estonia, it did not fall significantly or even grew.

Before the pandemic, Riga International Airport was a convincing leader in the Baltic by the number of passengers transported. Currently about half of the previous volume has been recovered.

“Over the last year, we see that Lithuania's three largest airports – Vilnius, Klaipeda, Palanga – have reached the level of Riga, which has never been the case before. That means some kind of market reallocation, which does not benefit Latvia,” said Jānis Hermanis, an expert at the Latvian Employers' Confederation (LDDK).

Hermanis said that in aviation and hospitality and other areas particularly affected by Covid-19, Latvia's economy has been affected by restrictions more. “The observations are that people from Latvia are traveling to neighboring countries to shop, to relax, to use different services. The conditions are laxer than we have,” Hermanis said.

Already in the first wave of Covid-19, private consumption fell in Latvia, explained by economists both with general caution and with less state support for households. Meanwhile, in the last waves of Covid-19, as payment card data show, the Latvian residents spent money abroad. It is true that retail drops are not long-lasting – as soon as the restrictions are lifted, volumes are rapidly recovering.

“It is difficult to say convincingly that 'here is a government decision and here we have a fall in the economy'. Trade, yes. It may well be seen that we have had these restrictions more prolonged, tougher, over holidays,” said Citadele Bank's economist Mārtiņš Āboliņš.

It hasn't been bad for all industries. Agriculture, health care, construction, financial sector, industry did relatively well. Exports of goods have increased particularly rapidly, but their share of the economy is not as high as in Lithuania and Estonia. “These are the hopeful components, particularly the export of goods, which allows for a faster recovery, but we have smaller muscles than [Lithuania and Estonia], to put it simply,” Hermanis said.

Services exports have done worse in recent years, not even taking into account transport and financial sector problems. Latvia has not done so well with attracting foreign investment in the long run. Investment is growing, but statistics show that foreign direct investment has climbed by 70-80% since 2015 in Estonia and Lithuania, while in Latvia it has grown by 40%.

The reasons for this can be sought in the cleaning of the financial sector when Latvia faced graylisting. The explanation, however, isn't as simple as that.

"The most obvious is, of course, this financial-sector 'repairwork', which has created a great administrative burden on financial-institution clients. But also in the longer term, much else has happeed. Both labor tax rates are higher in Latvia and the cost of energy,” considers Hermanis.

Zlata Elksniņa-Zščirinska, vice-president of the Foreign Investors Council of Latvia, estimated that the 'repairs' of the financial sector affected investments from the east, but this was a prerequisite for raising money from the west: “I value capital repairs as very, very positive. I would like to say that if we hadn't done such capital repairs, Latvia would not be interesting for investors."

She said that investment in the region was affected by both the Covid-19 and the geopolitical situation. But to stand out between neighboring countries, Latvia has lacked clearly defined advantages and identities that foreign businesses would associate with Latvia.

Citadele economist Āboliņš believes that Estonia and Lithuania have had more positive stories in general, while Latvia has had more failures. “We have had a strategic failure or the loss of a niche related to the Western-Eastern business model, to be a bridge in terms of both cargo and financial flows,” he noted.