september 6, 2019, 10:20
Economy
Authors: eng.lsm.lv (Latvian Public Broadcasting)
While the need to replace the use of fossil fuels and other polluting forms of energy with renewable sources is of growing importance, in 2018 consumption of renewable energy resources actually dropped by 4.5 % in Latvia.

Data compiled by the Central Statistical Bureau (CSB) show that in 2018 gross consumption of renewable energy sources (RES) in Latvia amounted to 76.8 petajoules (PJ). Compared to 2017, consumption of RES declined by 4.5 %, and over the past five years by 13.1 %. Their share in the gross energy consumption amounted to 35.2 % in 2018.

"Reduction in the consumption of RES was influenced by the drop in the volume of energy produced in hydro power and wind power plants," the CSB said.

Households are the main consumers of fuelwood – in 2018, fuelwood consumption in households amounted to 36 % of the gross fuelwood consumption, and, compared to 2017, the indicator has risen by 6.1 % reaching 22.4 PJ. During the past five years, the share of RES consumed in the production of electricity and heat in transformation sector has grown by 7.2 percentage points, reaching 35.1 % of the gross consumption in this sector in 2018. The rise may be explained by the transition from natural gas to wood chips in generation of electricity and heat in combined heat and power (CHP) plants, the CSB said.

Nevertheless, on paper at least, Latvia remains among the greenest energy users in the European Union. Latvia has set a target to reach 40 % of the energy produced from RER in the gross final energy consumption by 2020. In 2017, Latvia had the third highest share of RER in the energy consumption in the European Union with 39% from RERs. The highest share was recorded in Sweden (54.5%) and the second in Finland (41.0 %), while the EU average indicator constituted 17.5 %. 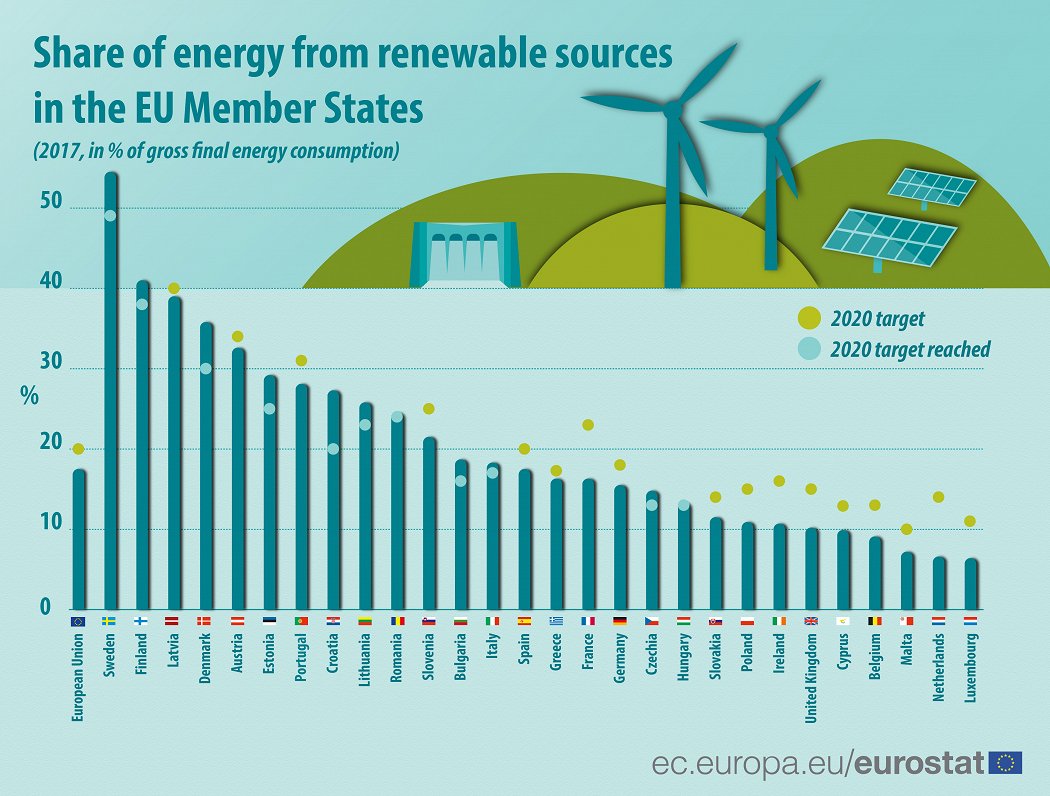