may 24, 2019, 11:54
Transport
Authors: eng.lsm.lv (Latvian Public Broadcasting)
On May 23, amendments to the Road Traffic Law came into force which stipulate that drivers do not have to take their vehicle registration certificate and driving license with them every time they buckle up.

In future, as long as they have a valid personal identification document such as a IN card or passport, they will not be breaking the law, the Road Traffic Safety Directorate (CSDD) confirmed. Until now, drivers unable to produce a vehicle registration document and driving license upon demand by a police officer risked a fine, but that is no longer the case.

However, despite the legal change the CSDD recommends that drivers still take those same documents with them to make it easier to deal with unforeseen events such as road accidents.

It should also be noted that Latvians driving in other countries and foreign drivers behind the wheel in Latvia do still need to have their license and vehicle registration with them at all times. Also, when driving a vehicle owned by someone else, the same documents should be taken, so in effect the changes to the law only apply to those who have a driving license issued in Latvia and a vehicle registered in Latvia in their own name.

Here is a graphic from the CSDD designed to clarify the situation. 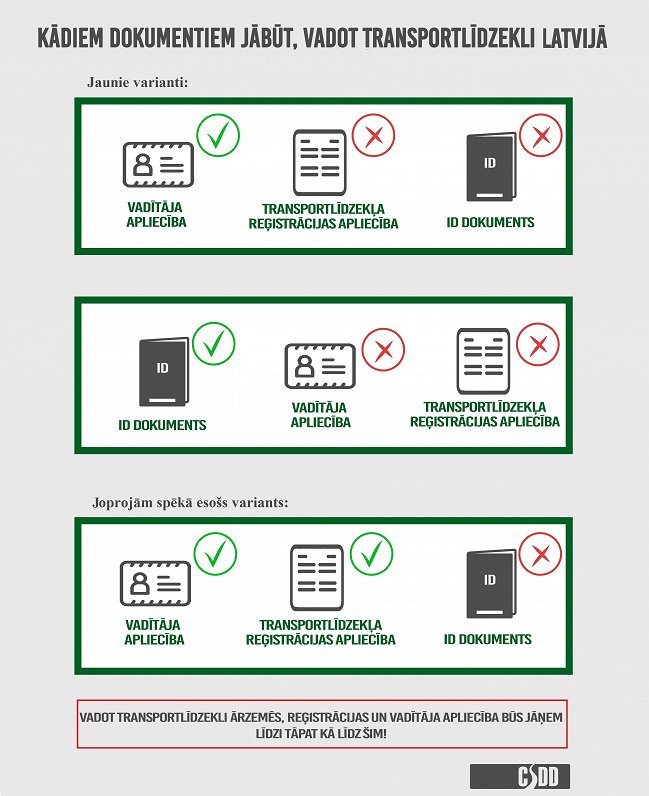