After being fined close to €28m by the European Commission for removing a rail track to Latvia, Lithuanian Railways (LG) now say they will rebuild the missing link, reports LETA October 18.

The 19-km railway stretch from Mazeikiai, northern Lithuania, to Latvian Renge municipality was dismantled nearly a decade ago.

"It is likely that we will soon start rebuilding the Renge stretch to settle the issue," LG CEO Mantas Bartuska told a news conference.

He could not specify the costs of the rebuilding efforts. Earlier calculations suggest the investment could total at about €20m. Bartuska earlier told BNS that two more railway tracks led to Latvia, used to a maximum of 20% of their capacity.

Bartuska also said at the conference that while he allowed there may be additional claims from Latvian Railways over the dismantled track, they are unsubstantiated.

"We should understand that Latvians are our brothers and competitors. They can name various sums, we heard hypothetically high sums, however, if there are no grounds, they are useless. We intend to speak with Latvians shortly. Will it help to solve this, we'll have to wait and see, what is important to us is that we have partnership and good relations with Orlen and our colleagues in Latvia," Bartuska told a news conference on Wednesday.

While European Commissioner for Competition Margrethe Vestager last week said in Lithuania that rebuilding would solve the problem of the removed Renge tracks. Lithuania's officials publicly maintain the tracks, which were important for Orlen Lietuva, were dismantled for purely safety reasons.

In 2008, Orlen - a fully owned subsidiary of PKN Orlen, a Polish oil company which is a major commercial customer of Lithuanian Railways - considered redirecting its freight from Lithuania to Latvia by using the services of another rail operator.

In October that year, Lithuanian Railways dismantled a 19km long section of track connecting Lithuania and Latvia, close to Orlen's refinery. The removal of the track meant that Orlen would need to use a much longer and more costly route to reach Latvia. Since then the dismantled track has not been rebuilt. 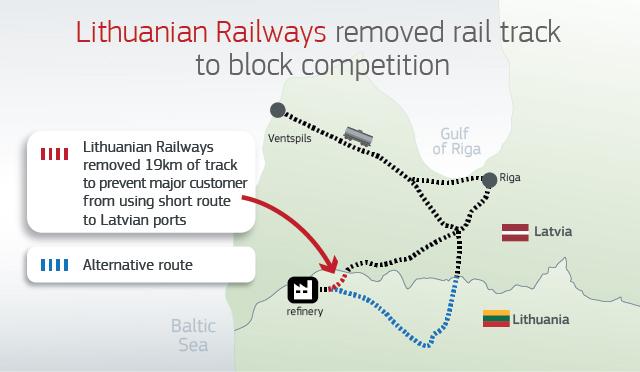 An EC investigation found that these actions hindered competition on the rail freight market by preventing a major customer of Lithuanian Railways from using the services of another rail operator. Lithuanian Railways failed to show any objective justification for the removal of the track. Such behavior was found to be in breach of Article 102 of the Treaty on the Functioning of the European Union (TFEU) which prohibits the abuse of a dominant market position.

In addition to imposing a fine, the Commission's Decision requires Lithuanian Railways to bring the infringement to an end and refrain from any measure that has the same or an equivalent object or effect: in other words, to rebuild the link to Latvia.