Pensioners and others with health problems are being targeted by unethical advertising campaigns in which fictitious medical professionals recommend the use of humble vitamin pills to cure everything from deafness to parasitic infestation, an LSM investigation reveals.

In his medical coat, with graying hair and an air of calm authority, Ivars Klicevs cuts a reassuring figure. He is just the sort of person you would like to see behind a doctor's desk when you walk into his surgery in search of a cure for your haemorroids. And your bad breath. And your fungal infections and ringworm.

You noticed Dr Klicevs on the "Latvian Medical Blog'' web page, where it said he was director of the national parasitic disease center. You read a lengthy interview in which he talked about conditions similar to yours. With 21 years and more than 60 publications under his belt, if anyone can help you out of your extremely uncomfortable and embarrassing medical situation, it is surely the good doctor.

Yet Dr Klicevs is not all he seems. For one thing, he doesn't exist. Or rather, he exists only online and under different names, according to where you happen to be located.

In Poland he is Radoslav Karpiuk, in Slovakia he is Miroslav Podmanicky. 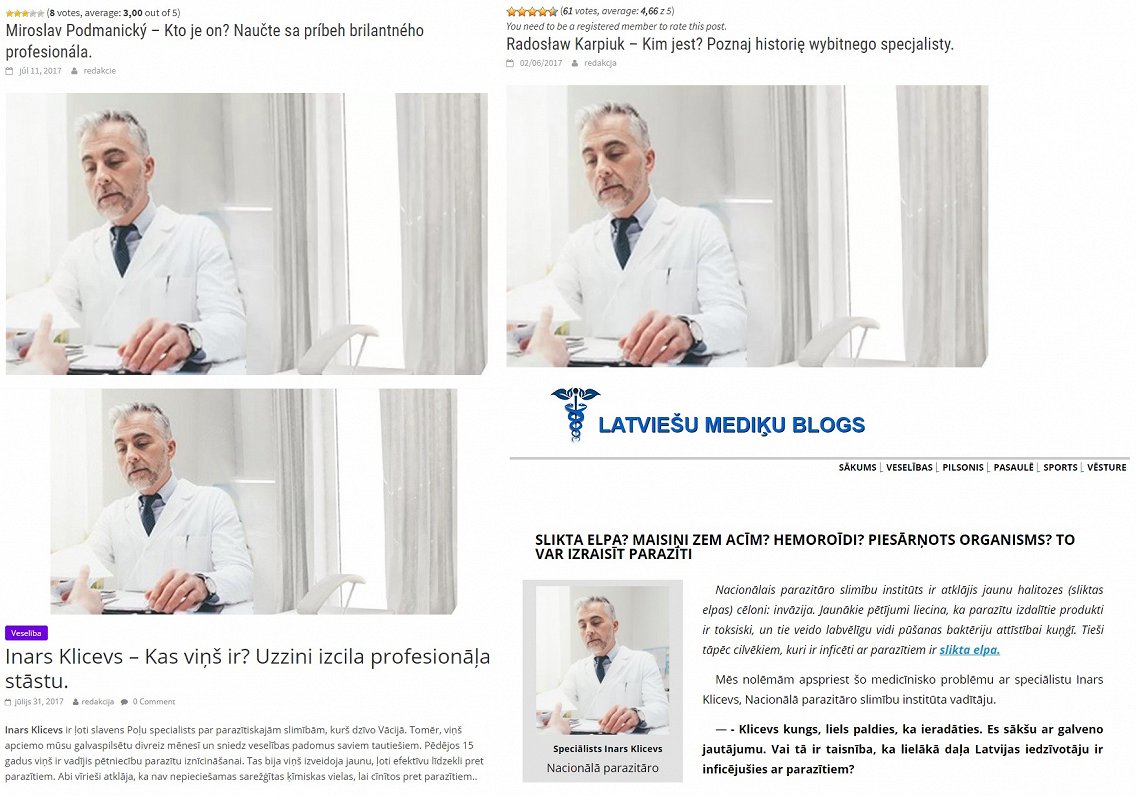 Nor does his identity crisis stop there. As the Diena daily reported earlier this year, until recently the director of the national parastic disease center with 21 years'experience and more than 60 publications under his belt was one Dr. Janis Zarins M.D. (sic!), who was simultaneously known in Lithuania as Mykolas Petronius.

Whatever his name, in all four countries he is an eminent specialist in parastitic diseases and is keen to sell you a vitamin tablet called Parasinea at a specially reduced rate of 49 euros via the social media and email sites where his many faces appear.

Just to be on the safe side, perhaps you should seek a second opinion from an even more reassuring medical practitioner.

Step forward Dr Robert Miller (or possibly Muller) via another Latvian medical blog called Health facts. A handsome German physician with a cheeky grin, in his own words Dr Miller has helped more than 1200 patients overcome hearing loss at his Berlin clinic. Coincidentally, he recommends some vitamin supplement tablets, too. They are called Multilan Active and will cost you just 39 euros a bottle at a specially reduced rate.

Yet sadly, not even the clean-cut Dr Miller can be trusted. A quick image search reveals he bears an uncanny - one might go so far as to say identical - resemblance to a stock photo of a medical professional that is available to download online. Identical that is, but for one detail: his stethoscope has disappeared. After all, you might be a bit suspicious even of Dr Miller if he placed his stethoscope over your ear and asked you to cough. 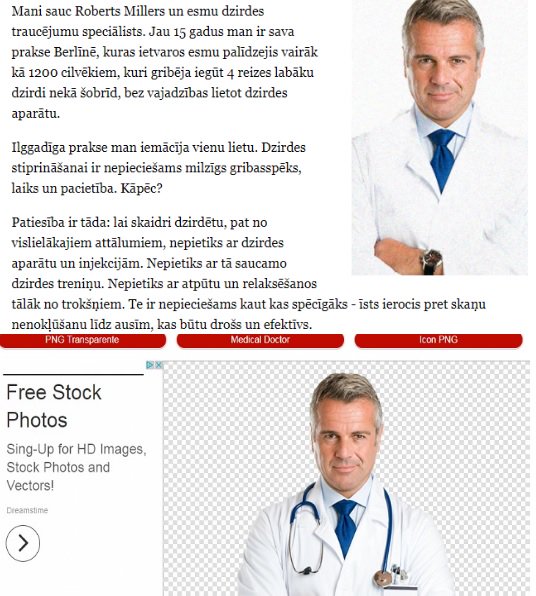 And it seems those on the receiving end of the expertise of doctors Miller and Klicevs also have identity issues that are about as likely to be resolved by popping a few vitamin pills as deafness or parasitic infections.

The cover story of the Health Facts blog outlines the heartwarming tale of 85-year-old ''Mrs Vija" and how her devoted daughter, while working in a Swiss medical clinic, heard about the way special vitamin pills can improve hearing. She procured some for mama and - hey presto - it worked. The pills also seem to have rejuvenative properties as neither of them have aged a day since 2014 when they were used to illustrate a blog about pensions in the U.S. Mrs Vija and her daughter are stock images too. 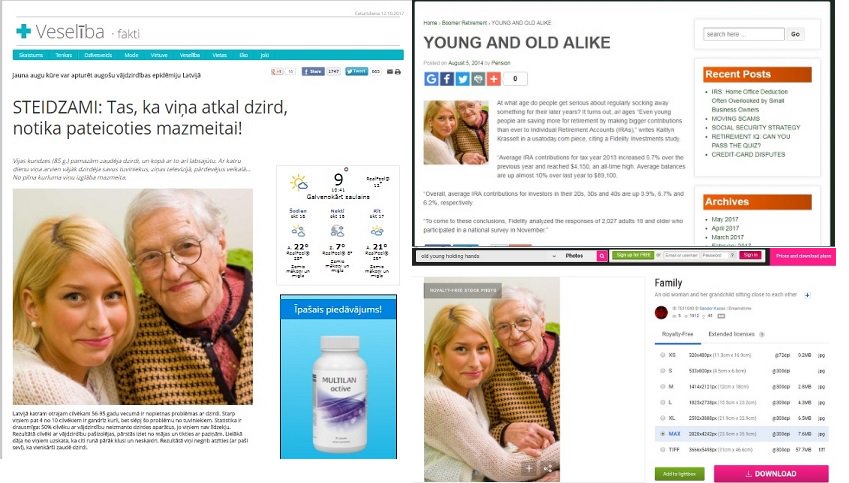 Clicking a link on the Health facts blog brings the reader to a long list of testimonials bearing witness to the effectiveness of the pills in question. Top of the list is a named individual, ''Inga Krumina'' who looks much younger than the 67 years she declares. One would rather say she was a middle aged woman relaxing on a bench. Because that's how she is listed in a stock photo catalog.

Who is behind the ads?

Registry information lists the registrant of the worldinfoclub domain on which the Health Facts pseudo-blog is published as a Polish domain, aftermarket.pl. That in turn is held by Cyprus-registered company Michau Enterprises Ltd.

The Latvian Medical Blog is published on the domain globalmagazine24.eu. Registry information lists again the registrant as Michau Enterprises, with one Michal Pleban named as a representative.

A LinkedIn page for Michal Pleban lists him as founder of Michau Enterprises and as a graduate of the Warsaw University of Technology. He describes himself as "founder of a successful and rapidly growing web company" and a former consultant with the Accenture consultancy. A company by the same name was liquidated in Slovakia in 2015, though it is not clear if this is linked.

Similar ads for everything from erectile dysfunction (Man Pride erectile gel will cost you 39 euros) to language learning (Ling Fluent will make you speak English in 2 weeks for 47 euros) use the same techniques: fictitious medical or other professionals giving some pseudo-scientific credence, and fake testimonials from named individuals who are really stock photos. Every few seconds a pop-up window announces the latest sale (e.g. ''Jazeps from Aizkraukle"), though if you wait long enough the same names cycle round time and time again. 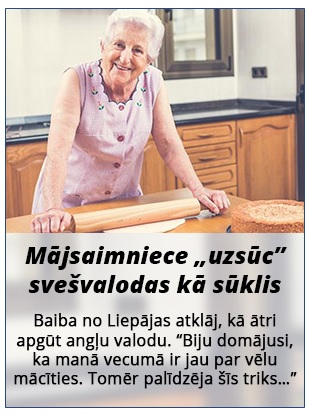 However, the Polish (and Slovakian) link does appear to be significant. Clicking to order the anti-parasite dietary supplement Parasinea, the order form has the web page title ''Sklep'' or ''Shop'' in Polish. In another bizarre detail, a series of certificates provided to attest to Parasinea's safety appear to have nothing at all to do with certification of foodstuffs or medicines. Though not provided in high resolution, one can just make out the issuer of one certificate as ''Germanischer Lloyd Certification". This is a Hamburg company involved in the ship building industry.

Another of the certificates can be seen to be issued to Sur Yapi Endustrie, a Turkish construction and real estate company. Quite how this would make a dietary supplement safe is not clear. 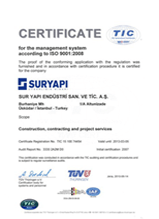 What can be done?

One of Latvia's top advertising industry executives, Andris Rubins of the DDB agency, says any reputable agency would not produce such advertisements.

"We check the facts and require the proof, we partner only transparent companies we can trust, advertise products/services that we would use ourselves or could recommend our friends; tell only truth when it comes to content; avoid industries and products that are not healthy or can have any other negative effects," Rubins told LSM.

However it is not unknown for top companies to use advertising in which people say they are people they are not: DDB's own recent campaign for the Live Riga tourist agency (majority owned by Riga City Council) used actors posing as a priest, a teacher and other professions. It subsequently won several awards.

The difference is that "LiveRiga ads have real sites and real routes... anyone visiting Riga can approach and enjoy them, only the characters and storytellers are fictitious just like in most ads, movies, books and other artistic content," said Rubins.

Asked if it checked the ads that appeared on its popular email site inbox.lv, company chairman Andris Griķis said this was a job for the Consumer Rights Protection Center (PTAC) and it was up to the advertiser to comply with the law.

"If a regulatory body, such as the Consumer Rights Protection Center, detects inaccuracies in advertisements, in accordance with statutory norms, Inbox LLC, as a law-abiding implementer of fair commercial practices, immediately terminates the placement of a particular advert in accordance with the law," Grikis explained.

Indeed, the fact that most of its ads were appropriate and not misleading was one of the reasons inbox.lv has retained widespread loyalty among users even in the face of global competition, he stressed.

And misleading ads were by no means limited to fringe practitioners, Grikis claimed, citing one striking example.

''It's no secret that the manufacturers of different products around the world... are sometimes based on questionable research. As an example, I can mention even one of the world's leading manufacturers of toothpaste, which tells users in advertisements that, in fact, all Norwegian dentists recommend the use of a particular product. However, an alternative study found that in practice, only one percent of dental practitioners recommend using this toothpaste. This involves the moral and legal responsibility of the advertisers themselves to their clients as well as the competence of the supervisory authorities," he said.

LSM sent a list of questions to PTAC for comment but after a week has received no reply. We also rang the contact number provided on the advertisements themselves to ask for the details of the company responsible for producing the Latvian-language ads but got no further than a lengthy wait on the line while muzak played, along with a nasty feeling that it might be a premium-rate number.

It should be noted that despite the lengthy and enthusiastic testaments to the efficacy of the dietary supplements, at no point do the vendors claim outright that they are medicines or that they will effect a definite cure - they just hint at it remorselessly and obtain an air of medical authority from association with fictitious doctors.

Inara Rubene, a qualified doctor and consultant to the pharmaceutical industry told LSM:

"I am wondering how this type of advertisement can even be perceived seriously. If one looks at the text and pictures, one should immediately be able to see that it is fake. It is hard to even evaluate such offers from a medical point of view, as they are so absurd."

''Unfortunately, the miracle drug culture is very popular in Latvia. I guess this could be explained with poor affordability of healthcare services combined with lack of education about evidence based medicine and understanding of medicine as such. I believe this has a great impact on people’s thinking. Controlling institutions should be much more active and even proactive, instead of waiting for the first reports, as their function should include following the market and educating people.

''My advice to potential buyers of any kind of medicine is to always first consult with a doctor and to critically evaluate the information sources. Additionally, I believe that ethical media should take part in this, and also evaluate the content they put out, as by publishing these unsound advertisements they also take part in the charlatanism,'' said Rubene.

As the listener to any Latvian radio call-in show will know, medicines and pills are at the forefront of many people's minds, particularly hard-pressed pensioners. 39 euros is a high price to pay for a handful of vitamin pills to someone struggling to get by on a state pension but might seem a worthwhile gamble to recover from deafness... if a ''doctor'' told you so.