Last May the historic Splendid Palace cinema in Riga played host to a sparkling film premiere. The film was called Pārgājiens (Walkabout), and told of the journey of Riga mayor Nils Ušakovs from humble beginnings to one of the most important jobs in Latvia.

The film itself is hardly a masterpiece: the chief gimmick being that the camera never stops moving while Ušakovs leads a gang of doting disciples around on a long walk, reminiscing about his past and his hopes for the future as they hang on his every word.

While positive about the mayor to the point of hagiography, it was claimed the film was not a political advertisement but a genuine inspirational "documentary" produced by Raimonds Elbakjans (who likes to refer to himself as "Intelligent hooligan") and directed by Māris Martinsons, and not commissioned by Ušakovs himself.

However, according to De Facto's information, Ušakovs' Saskaņa (Harmony) political party made financial contributions to Creativus Agency Ltd, owned by Elbakjans' business partner in the Ghetto Games urban sports organization (which is also enthusiastically promoted each year by Riga city council). The "Streetbasket" Association, led by Elbakyan, has received regular funding from the council-run Riga Tourism Development Bureau since 2014 for organizing a festival and competition under the Ghetto Games brand.

The film was investigated by the KNAB anti-corruption agency and found to fit the definition of a pre-election campaigning. It was released just ahead of municipal elections on June 3.

KNAB found that Saskaņa paid money that covered both film making, broadcasting and pre-release costs - though by no means the full amount required to make such a film. The party was fined as a result - the trivial sum of €250, which the party has already paid.

Asked to comment on the fine, Ušakovs himself told De Facto - appropriately enough from Cannes, the French town famous for its film festival:

"This film was made by people who I consider my friends. I believe that it was a great honor for me to have this product... But given the fact that this film was created at a time when everyone was very sensitive to any activity, given the climate of elections, the decision was made that it would be more appropriate for the party to pay [the fine], this is more correct. "

Indulis Pelnēns, Member of the Board of Creativus Agency continued to insist the film was made "with good intentions" and that funding was only requested for the chance to show it in the cinema. Other interpretations were the work of journalists, he insisted. 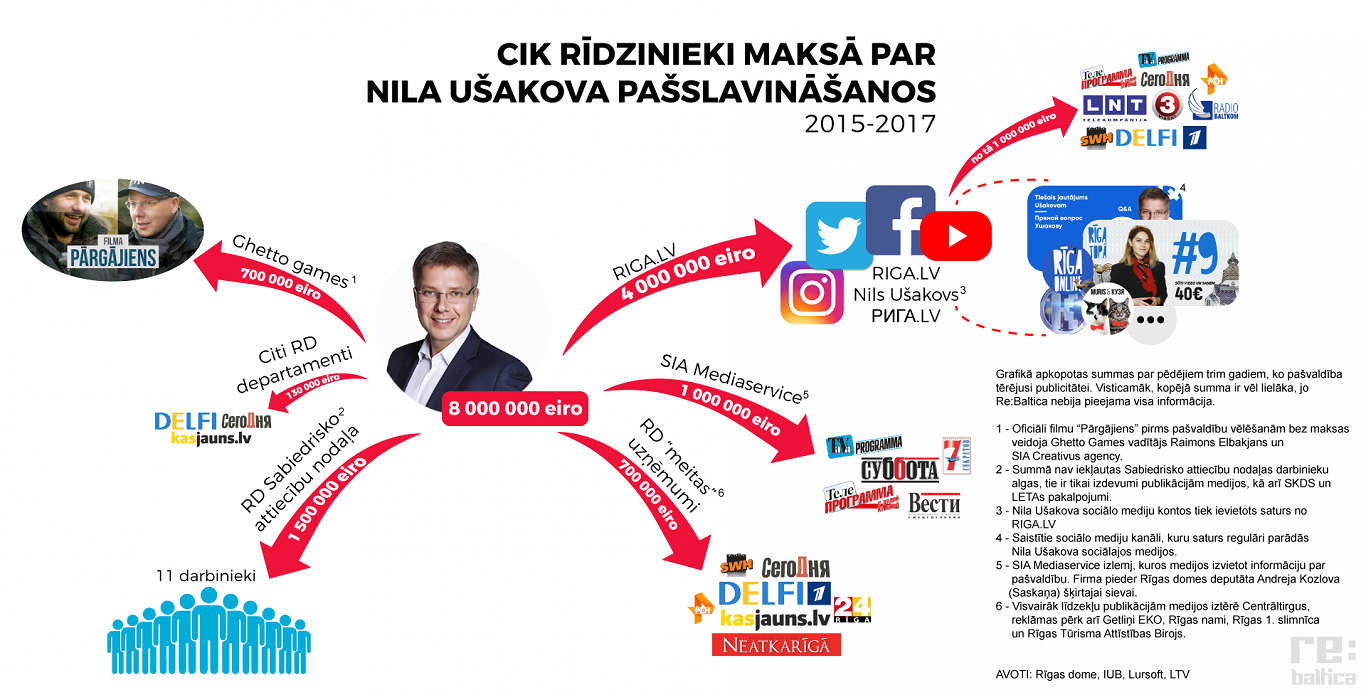 In parallel news, according to a report by Re:Baltica, Ušakovs has spent around 8 million euros of taxpayers' money on self-promotion over the last three years while performing the duties of chairman of Riga city council. The feature also alleges that a coterie of supporters from his Saskaņa party and even friendly journalists have of several occasions appeared at demonstrations and other events posing as ordinary members of the public in order to express their admiration for Ušakovs and back whatever initiative he happened to be pushing at the time.

Ušakovs is one of the most-followed figures on Latvian social media, with 115,000 followers on Twitter and 217,000 on Facebook.

"Ušakov's publicity mechanism consists of three large blocks. The first is generous advertising contracts for commercial media for the distribution of Riga News [releases from the city council]. The second is a network of loyal NGO activists who are ready to take to the streets when public support is needed. The third is an impressive social media network through which to build public opinion and criticize the opposition," says Re:Baltica.

Last year, Riga's official news portal was funded to the tune of at least €3 million, putting its spend on a par with the largest news portal in Latvia, Delfi, and there appears to be frequent crossover between the materials appearing on the city council site and Ušakovs' personal social media accounts. However, even though it is entirely funded by the city council, the portal is not an official city council body, meaning it is not obliged to release full details of its remuneration. However, Re:Baltica ascertained that many of its employees appear to be closely linked to the Saskaņa party.