The Latvian Chamber of Commerce and Industry (LTRK) carried out a survey asking entrepreneurs to evaluate the work of Latvian ministers. LTRK published the results April 19.

Between February 28 and March 17, 2022, LTRK conducted a survey in cooperation with the public opinion study center SKDS, in which company managers and leaders were asked to assess the work of Latvian government and ministers on a scale of 1 to 10.

750 entrepreneurs participated in the survey, estimating the government's work at a total of 4.29 out of 10.

The respondents evaluated the work of Finance Minister Jānis Reirs as the lowest, with 3.66 out of 10. Among the worst-rated ministers are also Justice Minister Jānis Bordāns (3.74) and Health Minister Daniels Pavļuts (3.79). Pavļuts received the highest proportion of the 'very negative' evaluation of 1/10.

Foreign Affairs Minister Edgars Rinkēvičs has received the highest rating at 5.98 out of 10. Defense Minister Artis Pabriks and Culture Minister Nauris Puntulis are also among the favorites. 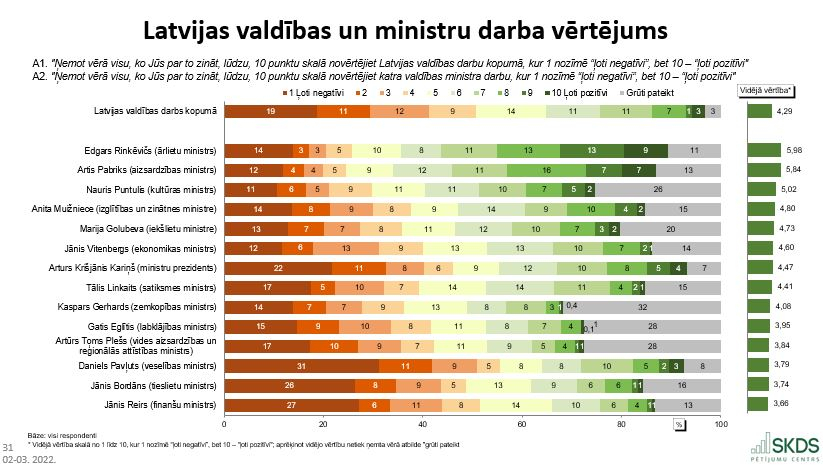