july 10, 2019, 12:55
Defense
1 comment
Authors: eng.lsm.lv (Latvian Public Broadcasting)
July 10 marks the 100th birthday of the Latvian Army with a range of events taking place across the country to mark the occasion.

The Latvian Army was established on July 10, 1919. Before this date the organization of Latvia's forces had not been formalized with different northern and southern brigades doing their best to coordinate their efforts against a range of different foes and to act in concert with Estonian and other allies following the proclamation of independence on November 18, 1918.

During this difficult time, on July 10, 1919, the Latvian Army was formed. The Transitional Government officially assigned General Davids Simansons as the first army Commander-in-Chief, who issued Order No1 to the Latvian Army the following day.

Despite being short of supplies and ammunition, a few months later, on November 11, 1919, this newly created army successfully defended Riga from assault by Bermontian troops, ensuring that the young republic would survive.

Celebratory events will be held not only this year, but also into 2020, when on August 11, 1920, a Peace Treaty was signed that brought an end to hostilities that had been ongoing since the start of WWI.

Congratulations to all members of Latvia's armed forces, past and present. 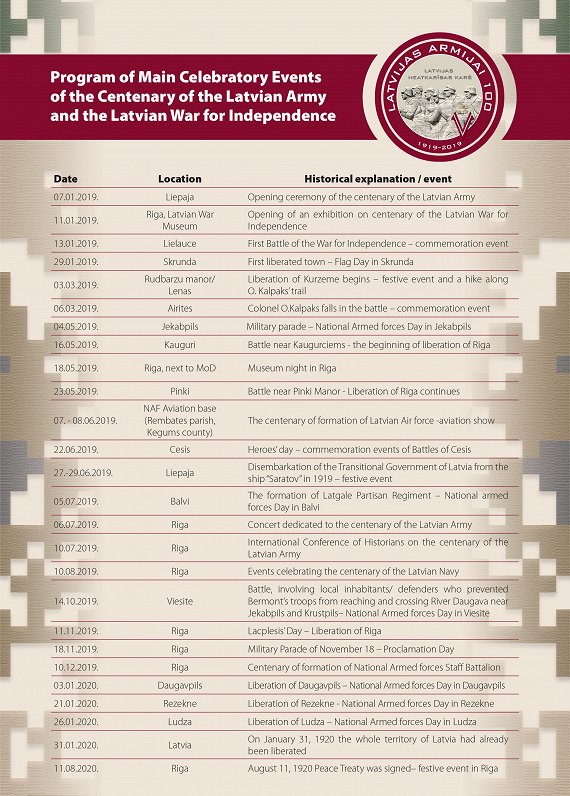