Since the beverage packaging deposit return system was introduced in Latvia in February, the number of deposit packages passed has reached 61 million, the deposit packaging operator reported on July 12.

Compared to the previous month, the amount of packaging deposited has increased by 63%. The operator said this was due to both the Midsummer holiday and hot weather and the increasing availability of products marked with a deposit label in trade. In June, 49.5 million units of deposit packaging were placed on the market, which is 30% more than in May, while a total of 138.5 million packages with a Latvian deposit label have already been placed on the market as of February. 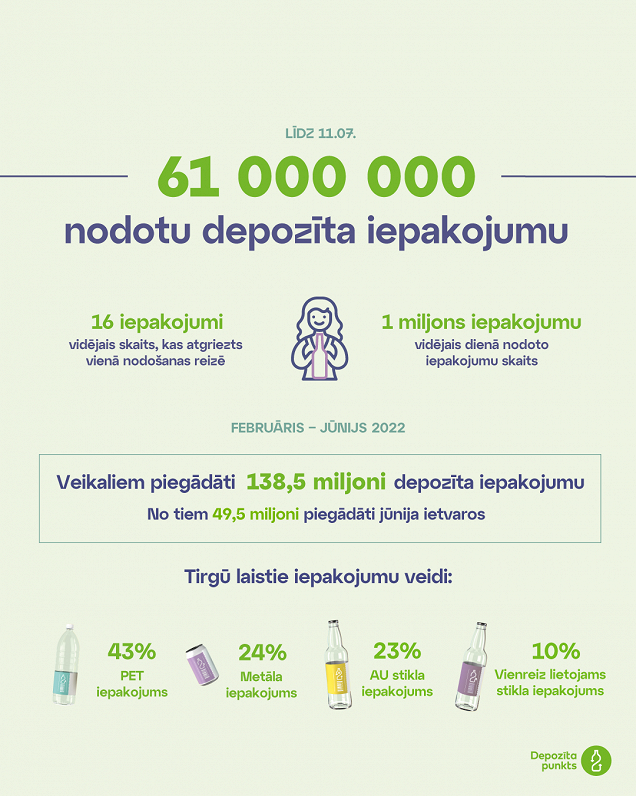 In June, 43% of the packages placed on the market with a deposit label were PET bottles, 24% were cans, 23% were refillable glass bottles, and 10% were disposable glass bottles. During the Midsummer festival, there was a significant increase in the proportion of glass packaging, as beer and light alcohol cocktails were used more frequently.

From February 1 to July 11, more than 61 million packing units were transferred to the deposit system. Current data show that on average more than 1 million empty packages are deposited daily.

Residents deposit on average 16 units at the same time, while the average time between the time the package is purchased and its transfer at the deposit point ranges from 4 to 6 weeks.

As of August 1, the marketing of packages without the Latvian deposit mark is prohibited.

The proportion of deposit products in Latvian shops currently ranges from 85% to 99%.