In contrast to a recent report from the Organization for Economic Cooperation and Development (OECD) that had Latvia as a top reforming member state, the latest report from the organization has Latvia at the other end of the scale when it comes to life expectancy in general and fruit eating in particular.

Among the many factors examined in the report by the OECD, alcohol consumption has declined since 2000. However, consumption has increased in 13 countries over the same period, most notably in Belgium, Iceland, Latvia and Poland.

"This is largely explained by older people [in countries including Latvia] having lower levels of education, and the greater prevalence of risk factors among men, such as tobacco and alcohol use," the report says.

In an unusual but eye-catching statistic, Latvians appear to eat less fruit each day than any of their peers (see graph above). It is some consolation that the situation with regard to vegetables is slightly better.

In another worrying sign, Latvia is one of the OECD member states with the highest incidence of death from accidents, self-harm or violence, along with Brazil, Lithuania, Russia and South Africa.

Less than half of Latvians (46.2%) rated their health as "good or very good" when surveyed by the OECD, with 16.3% saying they could be classed as being "in bad health" and  37.5% saying they were in "fair" health.

In one piece of good news, the number of people smoking on a daily basis has dropped significantly since the turn of the millennium. In 2000, around 33% of adults smoked every day. By 2015 that figure had dropped to 24%, though this is still above the OECD average of 18% of the population.

Sadly, on alocohol consumption the trend is in the opposite direction with Latvians actually knocking back more booze than they did previously. In 2000 the average was 7 liters of alcohol per capita, but by 2015 that figure had risen to nearly 11 liters. However even that figure pales next to the 15 liters per annum that the average Lithuanian is able to put away. 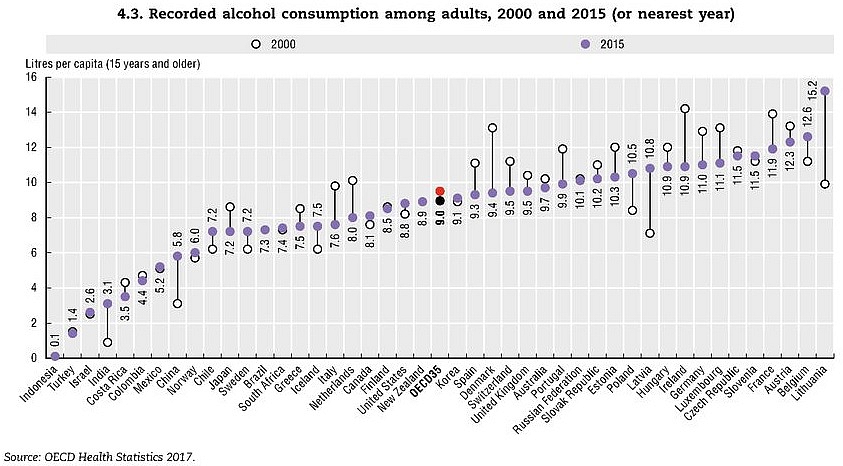 The full report is available HERE.