Latvian stalls are a hit at German Christmas markets

At the Lucia Christmas Market in Berlin, Dace [No surname given] sells Latvian wares side by side with stalls from other countries from northern Europe.

"We fit in well and they love us here," she says.

The Latvian stand has been in existence for ten years now, selling small household items: handicrafts, ceramics, wood products, candles and other things. “It happened that in the first year I helped to find a market and organize a stand for people from Latvia. I myself also helped on the stand. The following year, they didn't want to do it anymore, but I realized that I liked it and and took over the stand and trading,” says Dace.

Participation requires a good amount of market research to discover what might appeal to German tastes, but customers can be extremely loyal, returning year after year, says Dace.

"Demand and taste change every year. This month, the most popular items were small, colorful ceramic dishes, wooden toys and candles with dried flowers," she says.

"Now that there are cheap flights, many people take weekend breaks with friends and family. They have walked through the Rīga streets, tasted, felt something of Latvia. And everyone likes it. When the world gets to know us and our culture, the attitude and feedback are very positive."

At the other end of Germany, in the picturesque Black Forest, Latvian goods are offered by Latvian entrepreneur Iluta Kēfere. For thirteen years she has been present at the Christmas Market in Donauensingen with her stand, and for the last four years Iluta has been working with her assistants on two stands - Latvian delicacies are separated from non-food items and are sold on a separate stand.

When in Latvia, Iluta finds suppliers at the Rīga Central Market, by going to fairs to finding something special. For larger volumes, especially food items, suppliers are not always easy to find - often they suffer from poor communication and delivery methods, she says. However, over the years she have been able to find good cooperation partners.

“Although I have lived in Germany for many years, I identify myself with Latvia. I genuinely believe 100% in selling things that are authentic and high quality," Iluta says, adding that she also delivers some of her products by mail.

German tastes are generally rather conservative, but they love to find out the full details of any product in which they are interested, Iluta says, meaning it is important to know all about your own products. 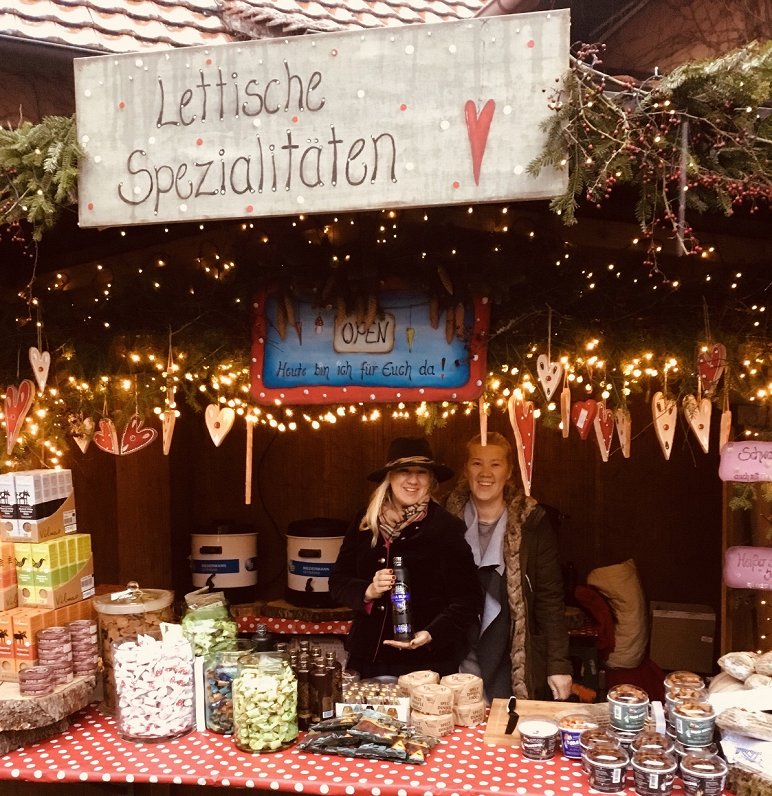 “Here, nobody buys anything by accident. A lot needs to shown, and be explained. Goods always sell better when they are backed up by an idea, with the story. So I tell about everything - about how bread is baked, about Christmas traditions, and so on.”

A steady circle of regular customers has grown, with some even coming from Switzerland. There are many German buyers who have visited Latvia and, thanks to their pleasant memories, buy bread, garlic toast or black balsam, she says.

The small town of Borgholchuzen in the Giterslo district also has a Latvian stand, courtesy of its twinning with Naukšēni municipality in northern Latvia.

Janis Zuments, Chairman of the Naukšēni Municipal Council, says he is is pleased that the twinning is not only formal, but is resulting in real activity. Consequently Zuments went to Borgholchuzen in December to meet with his counterpart and promote the work of local craftsmen and producers at a stand in the local market.

"We realized that our craftsmen and home producers' offerings fit well into our cooperation - we can introduce Germamy to what is special from Latvia," says Janis Zuments.

"Our stand was different from others - it was very rich, colorful, decorated with lights with the Naukšēni belt pattern, and full of diverse, tastefully decorated goods," says Zuments. The mayor of Borgholchauzen confirmed this, emphasizing that the Latvian stand gives added value to the market and that locals appreciate the unusual and natural products which include knitwear, wax candles, eco cosmetics, honey products, bread, syrups, Naukšēni wines, cranberries in sugar, herb vinegar and more.

A pleasant surprise this year was the great number of Latvians also visiting the stand after hearing about it on social media.

Jānis Zuments says it was very touching: “Latvian families came from near and far. We talked about our friendship and cooperation with Borgholchauzen, about ourselves. Our stand became a meeting point where strangers got to know each other. A really heartwarming feeling.”