International projects see some children, who have been removed from their families, go on trips to the US twice a year. During this time, for about a month, they stay in host families. The program has come under criticism, and the Welfare Ministry wants to raise the minimum age for foreign stay to twelve. This is because these visits are often tied to foreign adoption, reports Latvian Radio.

How do these programs work?

The trips are funded from the US, with the host families paying for receiving children into their care. According to websites that manage the process, it costs several thousand dollars. The money is used to for travel expenses. Part of the sum is also used to evaluate the potential host family.

The family court or the orphanage in charge of the child decides whether he or she will be sent to the US.

Daina Roze, a lawyer who's in charge of the program 'Open Hearts and Homes for Children', described it to Latvian Radio.

"I announce the time the children are to be interview and by which time they have to apply," she said.

The children are first interviewed by representatives of the US program, in order to understand whether the children are able to communicate and adjust to their new surroundings. Likewise, they inquire as to the state of the children's health.

"The information is requested.. so that the family could be as prepared as possible for the child who's arriving to them as a guest," said Roze.

Children are accompanied by grownups, like specialists from NGOs, psychologists, and employees at family courts and orphanages. They are responsible for the children. "It's not like they're thrown into the host family like some kittens," said Ausma Bicāne, the head of a regional family court in Rēzekne.

In some cases, the children thrown into a new environment either cannot adapt to their surroundings, or have other problems.

"We've had cases when children have been taken back to Latvia during the program. We hadn't been told that the two children had a very difficult psychiatry [sic]. The family held fast for two weeks, but nothing worked to calm these children," said Daina Roze.

"We're very happy if we're able to find host families for half of the interviewed children. It's not like there are hundreds of families queued up in the US and waiting," she said.

Families in the US are urged to open their homes for Latvian children with emotional videos, such as this one.

Furthermore, while there are no official statistics as to the children's fates after they leave the orphanage–this fact confirmed to Latvian Radio by Daina Roze and Dace Rence, a board member at the Christian Alliance for Orphans–the aforementioned website nevertheless produces some statistics that would make hairs stand on end. 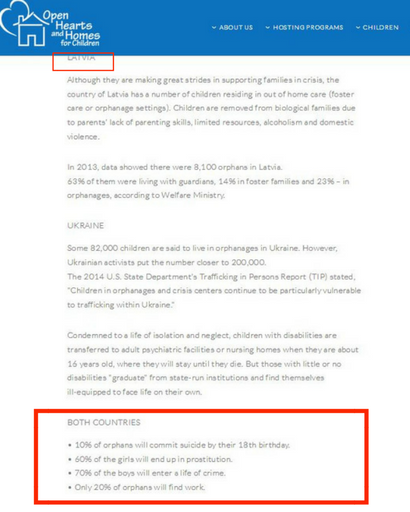 The website alleges that in Latvia, as in Ukraine, 10% of orphans would commit suicide before the age of 18; that 60% of the girls will end up in prostitution; that 70% of the boys will enter a life of crime; and that only 20% of orphans will find work after they leave an institution.

An agency representative told Latvian Radio that the statistic was extrapolated from orphan's fates across the world.

Another agency claims that in Latvia, children "age out" of the orphanages at the age of 16. It also describes that the term means. 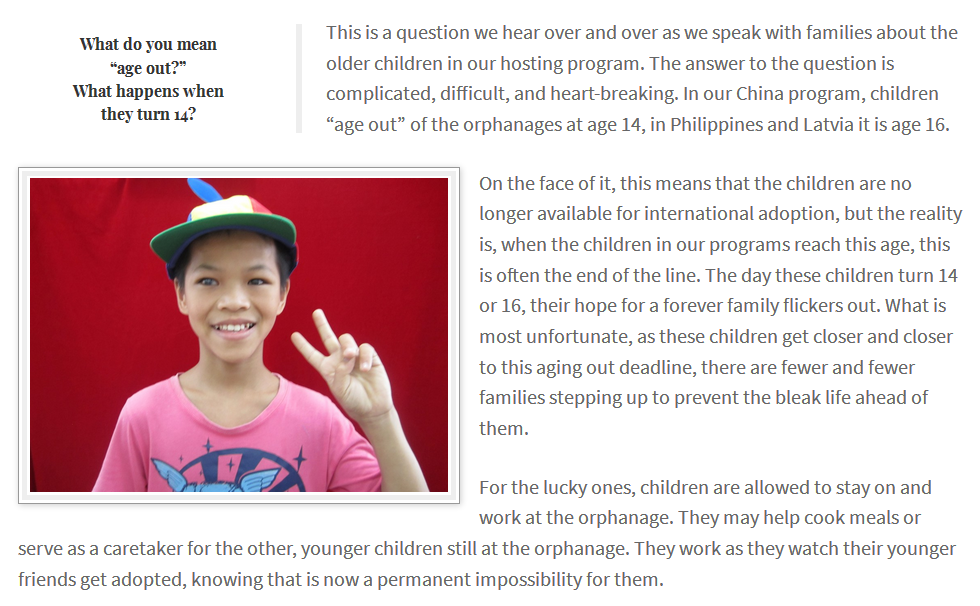 She says that children staying at orphanages can still be adopted after turning 16. "Nothing like that happens! It's complete nonsense. Maybe it's for attracting someone. I can't tell," she said.

It is however clear that foreigners who take in Latvian children for brief stays are not provided with the facts.

How many are adopted?

While adoption is supposedly not the goal of the host family program, nevertheless it's criticized as a 'guest performance' prior to adoption.

"There are not many cases, about 15 to 18%, when a child goes abroad and ties arise between them [and the host family]," said specialized lawyer Kristīne Lemantoviča.

"I've had many cases when the family says, that was not our goal. We simply wanted to give a good party to a Latvian child for Christmas. But then they came and we realized that we have a place by our table, there's a bed in the bedroom, and there's a place for them in our hearts," said Lemantovicā.

Daina Roze also mentions cases where foreign sojourns have turned into adoption. She thinks it happens to a minuscule number of children.

"In 2016 a total 917 parents were stripped of their guardian rights by court order. There's no data for last year yet. But last year just 67 children were adopted abroad. It is by no means a situation in which we hire charter planes and sell our children abroad," she said.

However, it can be gathered from insiders that these stays often turn into pre-adoption 'interviews'.

"The last two times I didn't even have children to offer to the host family program," said Aurika Zīvere.

While there are no statistics as to how many of these children go abroad each year, Latvian Radio estimates that there are about 350 children, of whom 15% may be adopted after.

Measures to curb the program

A working group has been set up to probe this long-running initiative. One of the proposals is to lower the minimum age of participation to twelve years.

"We've found an analogy, for example, in the education system, that children who can look out for themselves and have their own opinions are at least thirteen years old. We propose that the guest program is offered from the age of eleven or twelve, but definitely not from six or seven when children are at a loss as to how, for example, Rīga is different from Jelgava," said Reirs.