Share:
Ieteikt
Share
Tweet
may 9, 2019, 12:07
|
History
Authors: eng.lsm.lv (Latvian Public Broadcasting)
Members of Latvia's large Russian minority gathered in the capital Riga May 9 in large numbers to mark the end of World War II and the role of the Soviet Union in victory over Nazi Germany.

Police said they expected thousands of participants, though with people coming and going constantly a precise figure is almost impossible to state with certainty. Public transport authorities said the event would cause some disruption to the usual routes and timetables.

Known as "Victory Day" to some, May 9 remains a divisive date in Latvia. While many ethnic Russians, who make up around a quarter of the population, see it as a day of commemoration and celebration, most ethnic Latvians have a different view, seeing it as the start of a second, harsh 50-year Soviet occupation.

The official Latvian day for commemoration of victory over the Third Reich is May 8, with May 9 designated Europe Day and marked by smaller events on the other side of the River Daugava.

Caught between Russia and Germany, more than 100,000 Latvian citizens fought on opposite sides during the Second World War.

As usual the event will conclude in the evening with a concert and a fireworks display.

By 8 p.m. eight people had been arrested for offenses varying from petty hooliganism and public drunkenness to displaying Soviet symbols.

Harmony party leader, suspended Rīga mayor Nils Ušakovs, and other members of his party were among those laying flowers and wreaths at the giant monument.

The Riga event is not a public holiday in Latvia and has no official status, though police and other bodies concerned with public safety are forced to organize a large monitoring operation each year to regulate traffic and maintain order. 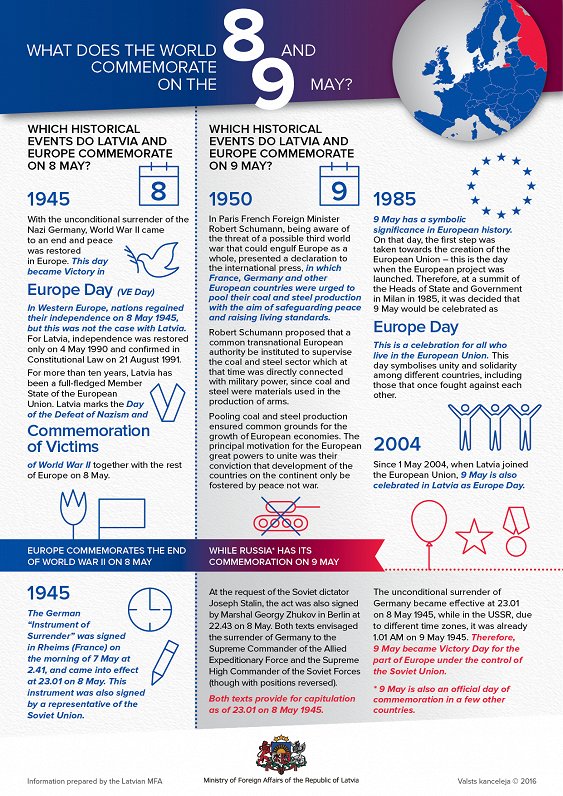