The story of the Latvian anthem, pt. 1.

june 6, 11:38
History
Authors: Judīte Čunka (LTV Ziņu dienesta korespondente), eng.lsm.lv (Latvian Public Broadcasting)
It was just a regular choir song, albeit one hated by censors and subject to burning. Dievs, svētī Latviju! (God Bless Latvia!), this song of songs, has accompanied Latvians through wars and foreign invasions, to be reborn again as a national symbol. June 7 marks a hundred years since this song was officially recognized as the Latvian anthem in 1920.

Part 1 of the story here.

Want to challenge your anthem knowledge? Take the quiz.

A well-protected testimony to its time

Nowadays, the Latvian anthem is stored at the Museum of the History of Riga and Navigation away from visitors' eyes. An old heavy door leads to a small room with low lightning and a number of closed shelves – this is the storage room of the fund dedicated to Latvian music history, the Song and Dance Festivals, and the nation's first composers. Museum employee  Antija Erdmane-Hermane carefully removes an envelope from a box and, having donned silk gloves, slowly produces a gray sheet of paper.

"As you can see, the original is in a rather poor condition. It was that way when it arrived, with brown stains and handwriting in brown ink. [..] It was likely stored with the sheet music facing down, with books or other objects leaving impressions on paper. It's likely there was humidity as well, leaving its traces on the paper," said Erdmane-Hermane.

The manuscript of the Latvian anthem by Kārlis Baumanis is a minuscule, calligraphic sheet score. 148 years old (it was written in 1872), the manuscript antedates its official designation as the national anthem by almost 50 years.

The original is very seldom removed from its location, it is never scanned and kept at a particular temperature and humidity. 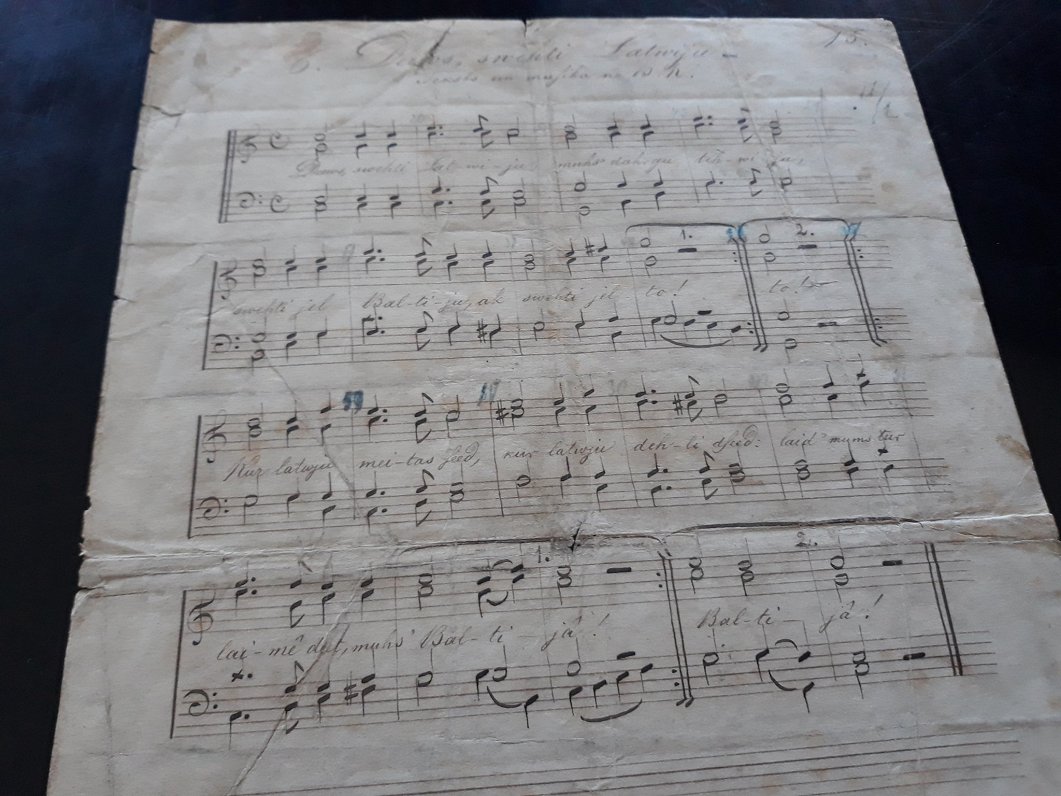 The manuscript arrived to the Rīga History Museum in 1937 from the former State History Museum, but its prior tradition is unknown. The Zemgales Balss newspaper reported in 1936, however, that Baumanis gave the original copy of the anthem to Jānis Pētersons, a friend who studied Russian from the composer. The manuscript had almost perished in a fire in 1920 in Moscow where Pētersons lived. In a weird twist, a firefighter had actually looted Pētersons' apartment, the newspaper reports, but hadn't thought the tiny scrap of paper to be of any value.

Below is a rendition by renowned pianist Vestards Šimkus, transposed and played at a quicker pace.

"This is a rendition in C major, a quite higher pitch. I'd say it's a more intense and passionate key as opposed to the keys we usually perform it in, namely F major and A major," the composer says.
Šimkus family actually has its own little story about the anthem. In 1988, members of the Nature Protection Club protested at Rīga's Arkādijas Park, fighting to reinstate Latvian independence. Šimkus' parents were among them.
"The song Daugavas abas malas was a popular choice back then. But my parents thought it's very important to reinstate the Latvian Republic, established on November 18, 1918, together with all of its symbols, including the flag, the coat of arms and the anthem, God Bless Latvia!" says Šimkus.
Their parents found old sheet music, printed during the interbellum, in their attic and Šimkus' father Gunārs gave it to a band-mate who in turn helped record a version using the synthesizer the renowned composer Mārtiņš Brauns gave him. It was then played during protests at the time of the National Awakening. "I'm very happy and proud to have this event in the history of our family," the pianist says.
The life and times of author Kārlis Baumanis
Kārlis Baumanis, or as they said in the olde Latvian, Baumaņu Kārlis, was born May 11, 1835 in Viļķene, northern Latvia. He was the sixth of twelve children in the family. The family later moved to nearby Limbaži, then called Lemsala. 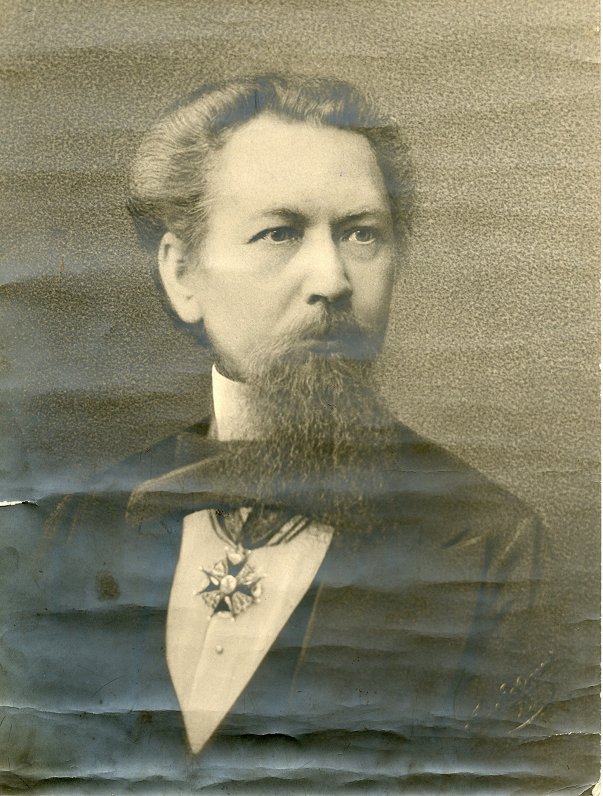 Now the central square of the seaside Limbaži bears Baumanis' name, while a monument has been erected in his honor at the old town. The Limbaži Museum meanwhile features an exhibition on Baumanis' life. This building, a 19th-century manor, once housed the post office and telegraph. It's possible that Baumanis came here to collect his pension. According to Gundars Plešs, a specialist at the museum, the interior of this museum reflects 19th-century mores, corresponding to the floruit of Baumaņu Kārlis, when he worked as a teacher in St. Petersburg. "We've found photos and matched the wallpapers accordingly. This room might be quite like the premises of the Limbaži Social Club which Baumanis often frequented," says Plešs. 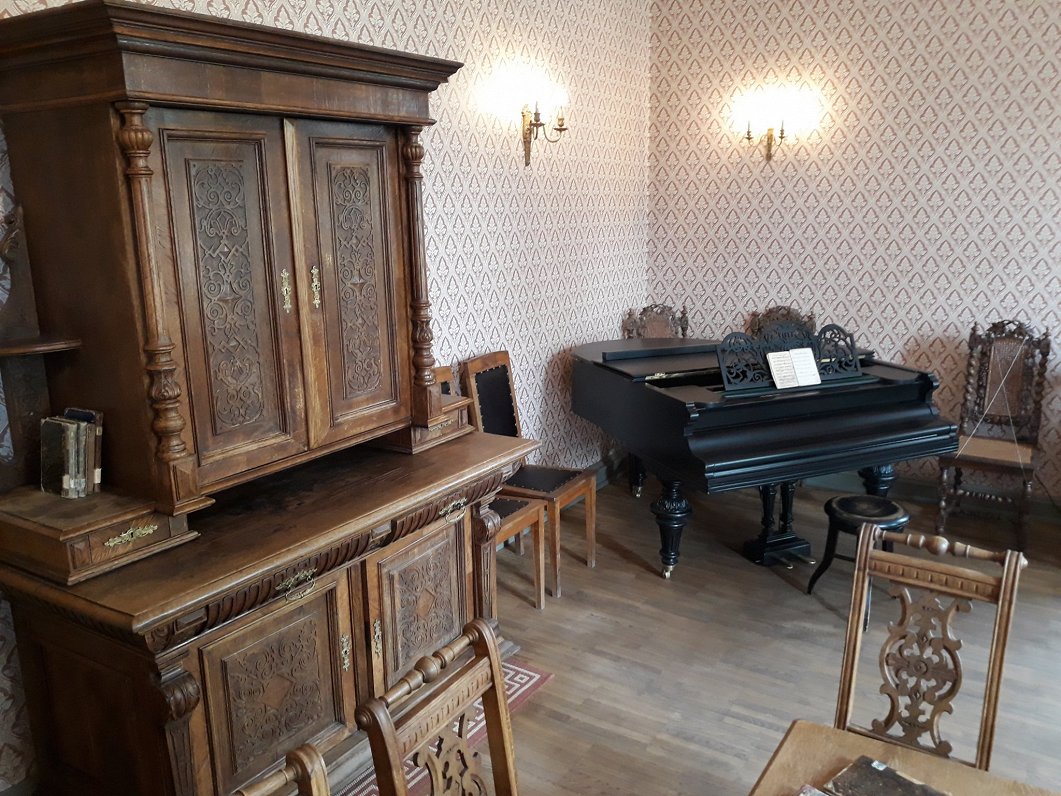 After working as a teacher in Limbaži, Baumaņu Kārlis moved to St. Petersburg. "He received a 11-room apartment from the Reformers School. He lived as an aristocrat at that time, you could say. Latvians living in St. Petersburg would gather at the apartment," says Diāna Nipāne, an employee at the museum. It is most likely that Baumaņu Kārlis wrote the anthem in St. Petersburg's 36 Moika Street, where he lived at the time. He was thirty-seven.
An anthem for the people
The anthem was first officially performed on June 26, 1873 (now July 8), when the first Latvian Song Festival was held in Rīga. The Rīga Latvian Society invited choral composers to write songs as there were few secular tunes to be sung – there were church songs, spiritual songs and folk songs, but few choral songs. Baumaņu Kārlis was inspired and sent a couple of tunes to the Rīga Latvian Society, including what is essentially a prayer of the people – Dievs, svētī Latviju!
"He very much disliked the situation in the late 1860s at the time when an amateur choral tradition sprang up in Latvia. The songs they performed were very German and only translated into Latvian. The content of these songs wasn't particularly high-standard," says Vestards Šimkus.
"Baumaņu Kārlis was very talented. He hadn't studied composition in an academic environment but he became the first composer in Latvian music history to write choral songs and solo songs with accompaniment," notes Šimkus.
But the song was not performed as part of the 1873 Song Festival program. It was instead performed at the Rīga Latvian Society in honor of the choir members, sung by the Baltic Teachers Seminar men's choir. Why? Jānis Kudiņš, a professor at the Latvian Academy of Music, explains this with politics. "Political censorship of Tsarist Russia forbade publicly performing a song that had 'bless Latvia' in it. There was no Latvia on the European map back then. The only thing you could achieve was to perform the song at a closed celebration, and it was in such circumstances it was first sung."

The song and lyrics were first published in the 1874 collection Austra. That same year, Baumanis also published the song book Līgo, which likewise included the anthem. These books are highly sought-after these days. Dzintars Gilba, a researcher at the Literature and Music Museum, showed a book at the museum collection, a small binding with black covers. This is one of the few copies of the Līgo song book that have survived to this day, because all the printed copies were confiscated in 1874 and burned at the bank of River Daugava.

"They burned it not because it includes God Bless Latvia but because Baumaņu Kārlis had a sharp tongue and had quite a few enemies," Gilba says. At that time Baumanis was very political, a member of the St. Petersburg Latvian Society, the Society for Latvian Letters and the Baltijas vēstnesis newspaper. He published pieces criticizing German landowners and the clergy. 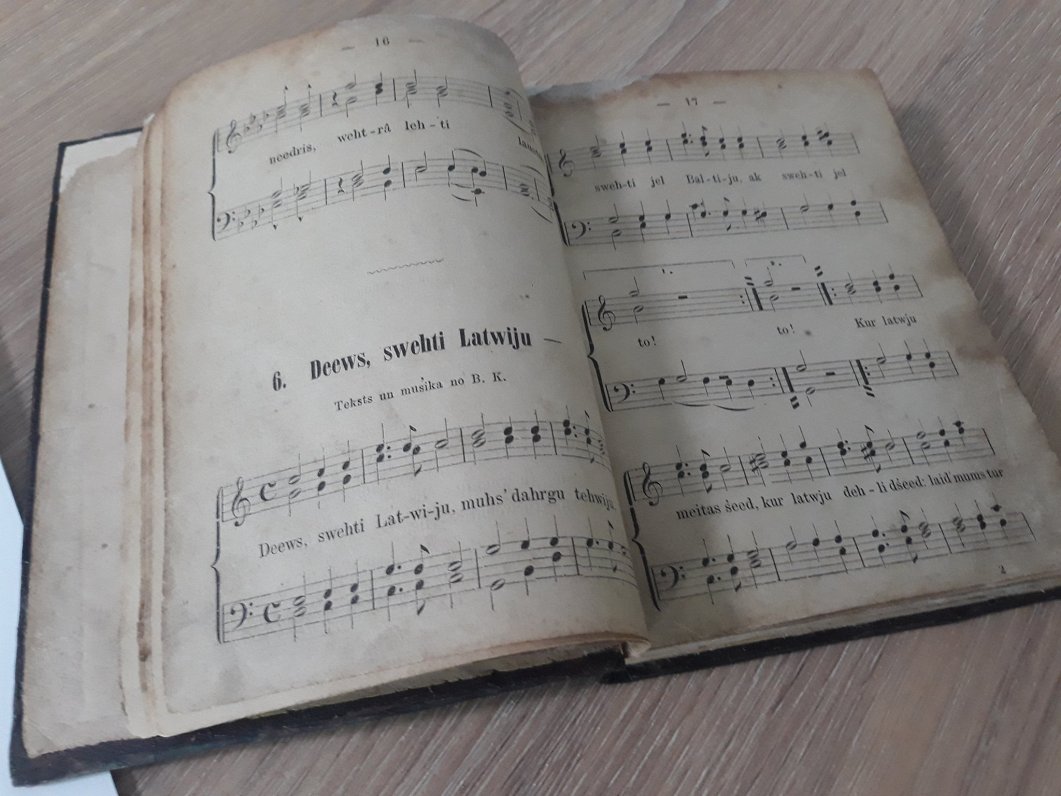 In 1877 Baumanis put together another collection, Vītols, in three volumes. The original is stored at the National Library of Latvia. The censor's signature testifies that the content was to be okayed, but Vītols was never released. Often the song was published with different lyrics as 'Latvija' was replaced with 'Baltija' or the word for fatherland. In 1880, when the song was first performed at a public concert, it was performed as God Bless the Baltic.

A non-expurgated version was first performed publicly in 1895 at the Song Festival held in Jelgava. It was a massive event, with a wooden stage constructed to hold 30,000 people, while the organizer – the great composer Jānis Čakste used diplomatic wit to secure the go-ahead to have the song performed as written originally.

A state symbol protected by law

According to Diāna Nipāne, the song which was to become the Latvian anthem started living a life of its own. "In the 1905 [revolution] when the Latvians raised their head, what did they sing? They sang God Bless Latvia. What did they sing during the Christmas Battles in World War I? They sang God Bless Latvia. It was perceived as an anthem of the people. When the Republic of Latvia was proclaimed on November 18, 1918 the participants sang the song thrice," she says.

Jānis Kudiņš agrees: "No-one even asked questions about an anthem. There was no official anthem. But somehow everyone realized that out of many historical and patriotic songs they had to sing exactly this song. The people's prayer, God Bless Latvia."

Kudiņš likewise maps out the uncertainties concerning official recognition. Any discussions prior to that have been lost to time, but on June 7, 1920 it was granted official status by Interior Minister Alfrēds Bergs of the Latvian Provisional Government. Interestingly enough, Kudiņš notes that the official communication only refers to the anthem as the "people's solemn prayer". It was only codified on September 25, 1928.

Overshadowed by the Soviets

The Latgalian Song Festival, held at Daugavpils' Stropi open-air stage, was the last time the song would be performed officially before Soviet occupation. It was June 16, 1940. "The feeling of premonition was in a way surreal. No one knew anything. Ulmanis' authoritarian regime was in place. Sadly he did a lot of harm as he didn't let the public in on the imminent danger, because the press was under complete control and censorship. Many things that happened in the world were unknown to the public. But people had a hunch, as we can gather from the eyewitnesses' memories. Something was about to happen, something was not right," says Kudiņš.

At the event, it was performed three times. The event ended close to midnight. The next morning saw the arrival of the Soviet army.

The anthem lost its official status July 19, 1945 when Anatols Liepiņš' Song About Soviet Latvia was made the anthem. Dzintars Gilba notes that it was banned in Latvia but was still sung in the free world, performed without censorship in the US and Germany, across DP camps, in the UK and Australia – wherever there were Latvians, it was sung as the national anthem.