The Board of the Latvian Regional Alliance (LRA) has requested Prime Minister Krišjānis Kariņš to immediately remove Welfare Minister Gatis Eglītis (New Conservative Party), according to a statement released June 6 by the LRA.

Gatis Eglītis, who was confirmed as the new Welfare Minister only days earlier, published a statement on Twitter that suggests that, despite the choice made by voters, State and European funds will continue to be available only to a select few municipalities with government coalition parties in power, the LRA Board explained the reason for the request.

"I would recommend that the municipalities headed by LRA/Union of Greens and Farmers/Harmony don't count their blessings yet, since the "government restart" of June 3 means that the big State Budget + EU fund + RRF money flow will be controlled by the four coalition parties (National Alliance, New Conservative Party, New Unity, Development/For!) which will primarily take care of '"their own" municipalities," Eglītis wrote.

He later deleted the tweet, but not before it had been captured for posterity by other Twitter users. 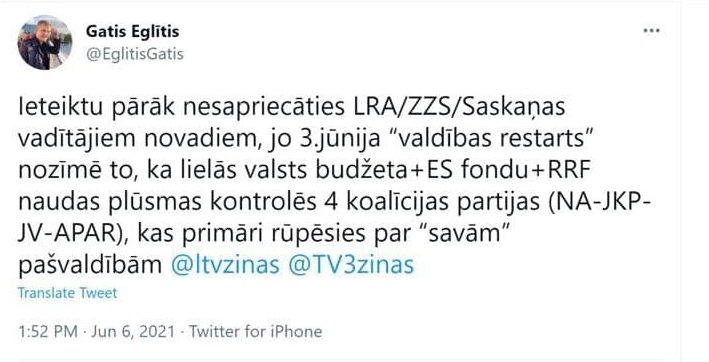 The Board of the LRA considers such statements to be categorically unacceptable and, according to the LRA, it shows a complete lack of understanding by Gatis Eglītis about state functions, democracy and the rule of law. A person with such views is not worthy of taking such a high position in a government whose task is to take care of the well-being of all Latvian residents and the opportunities for development of all the municipalities, says the LRA.

“Disappointed by his party's weak results in the election, Gatis Eglītis has said what he actually thinks. A country where people need to be divided into their own and others, politically right and wrong. To reward one's own, to punish others. This totalitarian way of thinking we see in all its glory in the neighboring country of Belarus. There is no room for such ideas and politicians in democratic Latvia,” said Edvards Smiltēns, Chairman of the LRA Board.

Later on Monday, Welfare Minister Gatis Eglītis spoke to Latvian Radio explaining his statement. He said he "had not formulated his thought well."

"Yes, well, I wanted to point out more about the practice that was at the time when the Union of Greens and Farmers (ZZS) was in power, when the projects were often divided on the basis of which the municipality, if it can be said, belonged to a particular political force. Knowing of the upcoming allocation of European funds for the period 2021 to 2027, then I wanted to point out again and again that, in our coalition, such allocation of money by party membership would not be acceptable.

"Each project must be assessed on the basis of its socio-economic background and must not, in any case, be considered from a party membership. Coalition parties make final decisions on the allocation of funds, it is not a surprise, it has always been, but the emphasis once again and again that it should be fair," Eglītis said.

Viktors Valainis, ZZS faction member in the Saeima, said that the allocation of European money is governed by increasingly strict criteria and regulations. According to him, Eglītis's statement is absurd.

"The European Commission has zero tolerance for such cases. There are monitoring committees, evaluation, multi-level selection, so that such practices do not take place. There are all the same rules and applications. If he said it as an MP, it would already be irresponsible, but he says it as a minister, then it's a matter of resignation,” Valainis said.

Meanwhile, the President of Latvia, Egils Levits, was tolerant of Eglītis' words. He called not to weigh every word that politicians say because they are human, too.

Prime Minister Krišjānis Kariņš will express his opinion on this issue after the meeting of the Coalition Cooperation Council.