What are the salaries of members of the Parliament, and what is their workload? Latvian Television's investigative broadcast Aizliegtais paņēmiens (Forbidden Method) looked at the parliamentary establishments in Latvia, Lithuania, Estonia, Finland and Denmark, and compared them on similar criteria.

Being a Saeima deputy in Latvia is not the most prestigious position. This can be concluded from the public's low trust in  Saeima work, different initiatives on cutting MPs' salaries.

The Forbidden Method compared the work of the Saeima deputies with the counterparts of Estonia, Lithuania, Finland, and Denmark.

First, the broadcast determined the proportion of Members against the whole population. The highest proportion was in Estonia at 0.008%, followed by Latvia and Lithuania at 0.005%. Finland had a proportion of 0.0036% and Denmark -- 0.003%. 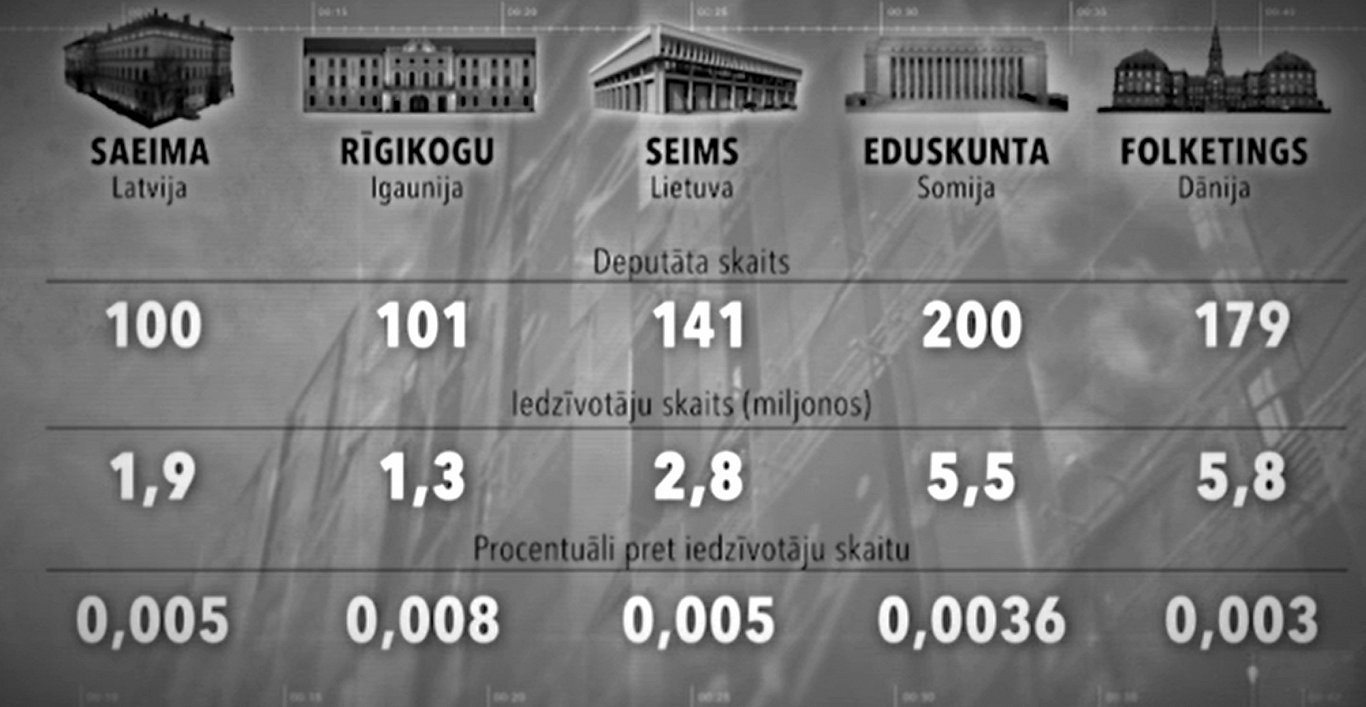 The main idea of all parliamentary establishments is similar. The deputies must regularly meet the society, residents, organizations, and listen to different ideas and proposals. Secondly, they must develop draft laws or amendments, convince other deputies in debates, then vote and adopt laws. The law is implemented by the executive body, which is the government, but the function of the Parliament is to control that the government does it.

Parliament's plenary sessions are the most visible to society, when the Members formally sit to vote.

In Latvia, there is one plenary meeting a week - on Thursdays. Among the five countries compared, this is the smallest number.

In Lithuania, plenary meetings take place twice a week, similarly to Denmark, where there are about 100 plenaries per year. In Finland and Estonia, there are four plenaries a week. In Estonia, after three working weeks, there is one without any plenaries.

At other times, the Parliament meets in separate committees. In  Latvia and Finland, the number of committees is 17. In Estonia, there are 26 committees. Deputies must also meet representatives of the public. In Latvia, MPs do it on Fridays.

It is true that the specific nature of the Member's work also depends on the Member's own desire to engage in the work. This was pointed out by Andrejs Judins (New Unity): “I will say openly, there are Members who can go on a holiday for four consecutive years, except that they come on Thursday, but they can do nothing and vote in the way they want to vote. It can work."

This was also confirmed by Saeima deputy Māris Kučinskis (Union of Greens and Farmers):

"The Saeima is a place where you can work, but you can also, let us say, only participate. In theory, the Saeima should elect those who have done something previously and have a lot of knowledge, so now … In recent years, the quality of the Saeima has fallen a bit, [I must] admit as a long-standing politician."

The opposite conclusion can be drawn from the statement by the Saeima Speaker Inara Mūrniece (National Alliance): “I would say that every Saeima member has the capacity to work very, very much, the opportunity to work less and the opportunity to work even less. But specifically in this parliamentary term, I see many colleagues who have also entered parliament for the first time. There is such high energy, and overall there is a great desire to work.”

“It's such a flexible concept. How do you look at it? I look at someone and I think he is working. Someone else feels that he is not working,“ commented Ivars Puga (KPV LV).

To get a clearer picture of how much work an MP really does, the broadcast investigated the amount of information publicly available about the work of MPs. It was found that overall, Latvian MPs tend to have less information  available than MPs of the other countries looked at.

For example, the Saeima deputy database has information about the MPs term of mandate, participation in committees and sub-committees, and a history of reports and debates in the Saeima. However, a profile of a Lithuanian MP has the biography, agenda, initiatives, speeches, votes on top of that. Or, for instance, in Finland many MPs have their own blog or website on top of that.

Saeima deputy Inese Voika (Development/For!), who formerly headed the anti-corruption association “Delna”, said: "I would certainly like to see that any resident of Latvia could get a much wider overview of what the deputies are doing now. Not just the commissions. I would also like to see that there would be an opportunity, like in the Lithuanian Parliament, that Members would be able to report, not only what proposals they have made and how many times they have spoken at the Saeima meeting, but also who they have met in the draft development process."

"And there must be regular communication with people as well. I think MPs should not be ashamed of what they are doing and should be accountable to the population. We have very low confidence in political work. I think, partly because there is no understanding of what is being done and how it is going," Voika said.

Comparing salaries of MPs, it must be noted that deputies in these countries are not allowed to work elsewhere, except authors, artists and tutors who receive royalties. In Latvia, deputies are allowed to continue work as doctors. Entrepreneurs may receive dividends from their business.

In Latvia, the base monthly salary of a Saeima deputy before tax is EUR 2,963, which is calculated by multiplying the average  salary in the country by factor 3.2. Currently the salary growth is frozen and does not increase with the average wage growth. Those who head committees or other sub-bodies of the Saeima have additional pay.

In Estonia, the base salary of a deputy is EUR 4,330 before tax, calculated using a similar factor system. In Lithuania, with the same calculation system, the salary is EUR 3,434. In Finland a base salary is EUR 6,614 plus additional pay with experience (repeated election); and in Denmark, if converted from the Danish krona, the salary is approximately EUR 7,300.

Comparatively, the lowest salary in relation to the average wage is in Denmark. The largest difference is in Estonia, followed by Latvia. 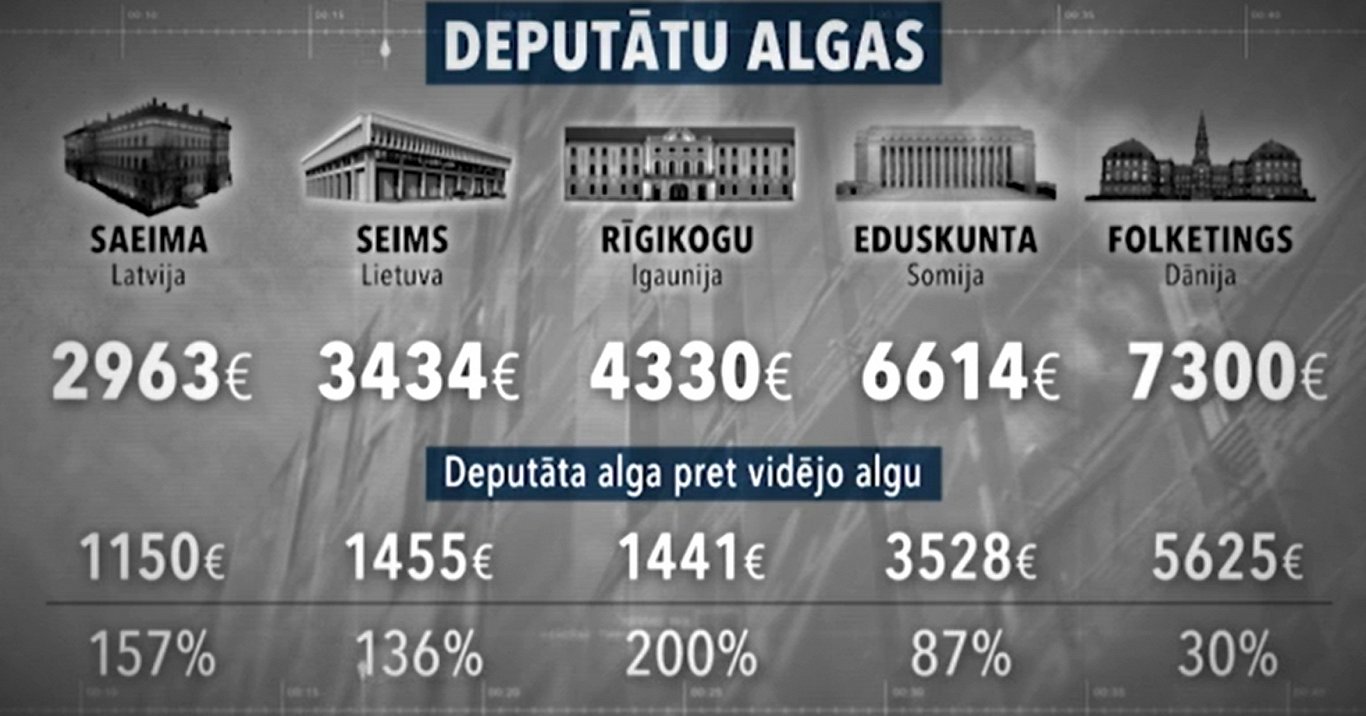 Among these countries, Finland is reportedly  the only one without great discussion about the salaries. In other countries, there have been attempts to stall the increase of deputies' wages.

In Latvia, deputies primarily have two bonuses: the possibility of applying for transport compensation or compensation for the apartment. The total amount of these may not exceed the average monthly salary of Latvia. For each Member, compensation is calculated depending on how far their place of residence has been declared from Riga. For those in Rīga, it is EUR 161 and EUR 1076 for the farthest-living Members.

The Saeima publishes the reports monthly on its home page.

As the Estonian Member's salary is EUR 4,330, the apartment support can reach EUR 866 and about EUR 1300 for other expenses. It is more generous than in Latvia. It is true that the costs must be proved by checks and receipts.

In Lithuania, in addition to the salary, support for “work in parliament” is set at 80% of the average wage in the country. Maximum aid: EUR 1,164 for both transport and other expenditure, but the need must be proved in receipts. So, Lithuania is also more generous than Latvia.

There have also been scandals in Lithuania around this spending. The largest was two years ago, when it was revealed that some Members had covered the purchase of car leasing from that money, thereby buying the car for the future.

In Finland, extra money is allocated to fuel costs, depending on the place of residence of Members, but everyone can use public transport free of charge, including intercity, for the purposes of employment. Taxis may also be used for free in Helsinki. Meanwhile, members from outermost regions of Finland are eligible for apartment refunds, with a ceiling of €1,809 a month.

In Denmark, too, the system is similar to Finland. Public transport, including subway, can be used for free for work purposes. When driving from afar, fuel compensation may be claimed. Such a system applies not only to parliamentarians, but also to other workers.

There are also compensations for renting apartments in Copenhagen for MPs whose main residence is in the regions, or they can be housed in hotels provided by parliament. In general, the compensation is also less generous than, for example, for members of the Lithuanian Seimas. In addition to the salary, MPs receive a residence-based premium of around €650.

The “Forbidden Method” concluded that:

at Baltic level, Latvia is in the last place of remuneration of Members of the Parliament. At the same time, it should be recalled that the working life of Latvian parliamentarians is the least transparent in terms of available information.