Bringing experience with UK financial regulator back to Latvia

february 11, 17:10
Latvians abroad
Authors: eng.lsm.lv (Latvian Public Broadcasting), Latvijas Radio Ziņu dienests
Kristīne Dambe began her university studies in the United Kingdom in 2006 and eventually had a bright career with the national financial regulator, however after 11 years she decided to get off the island and bring her knowledge and experience back to Latvia, according to a Latvian Radio broadcast on February 11.

The economic policy specialist currently works as a consultant for various projects, and her office is located in the Inspired media agency office space. She shares the space with the social innovation foundation “Plecs” (“Shoulder”), where her twin brother Jānis Erts is director of strategy.

After graduating with an International Baccalaureate from the Riga State Gymnasium No.1, Dambe considered studies abroad a logical next step, and chose the UK because of the good reputation for higher education. She chose to study economics and philosophy, graduating with a Master's from the London School of Economics.

“Afterwards I also understood working in my job with the financial regulator on consumer protection issues: to be a good economist, you also have to be a good philosopher,” said Dambe.

She hadn't specifically planned on staying in England, but her internship at the UK financial regulator pulled her in – wonderful colleagues, a good salary, experience and superiors who were open to new ideas. She worked there for seven years before she felt something had to change.

Retuning – leap into the unknown

“Great Britain of course has many good things in relation to healthcare and the education system. But Latvia also has several good things,” said Dambe.

The decision was made easier by the fact that her husband Kristaps, who had also studied in the UK, had a job in Latvia. For several years they mostly saw each other on weekends, but they wanted their daughter Marta to be born and grow up in Latvia. Although she felt that she could easily navigate the healthcare and school system better than in the UK, on the job front it was a leap into the unknown.

“If an economist compiled all the factors for staying in Great Britain and factors for returning to Latvia, then there would be no question about the balance. I created my whole adult life and career there, I had a good reputation there,” said Dambe. But her inner philosopher said something else.

“All of the factors must be weighed. There is no right choice. And through these hard, uncertain choices you make a decision about what kind of person you want to be and what you want to do,” continued Dambe.

In the end it was no longer important that she didn't have a specific place of work - she had a lot to do. She wanted to live in Latvia with her family and put her knowledge to use, which she felt would have a higher added value in Latvia than in the UK. 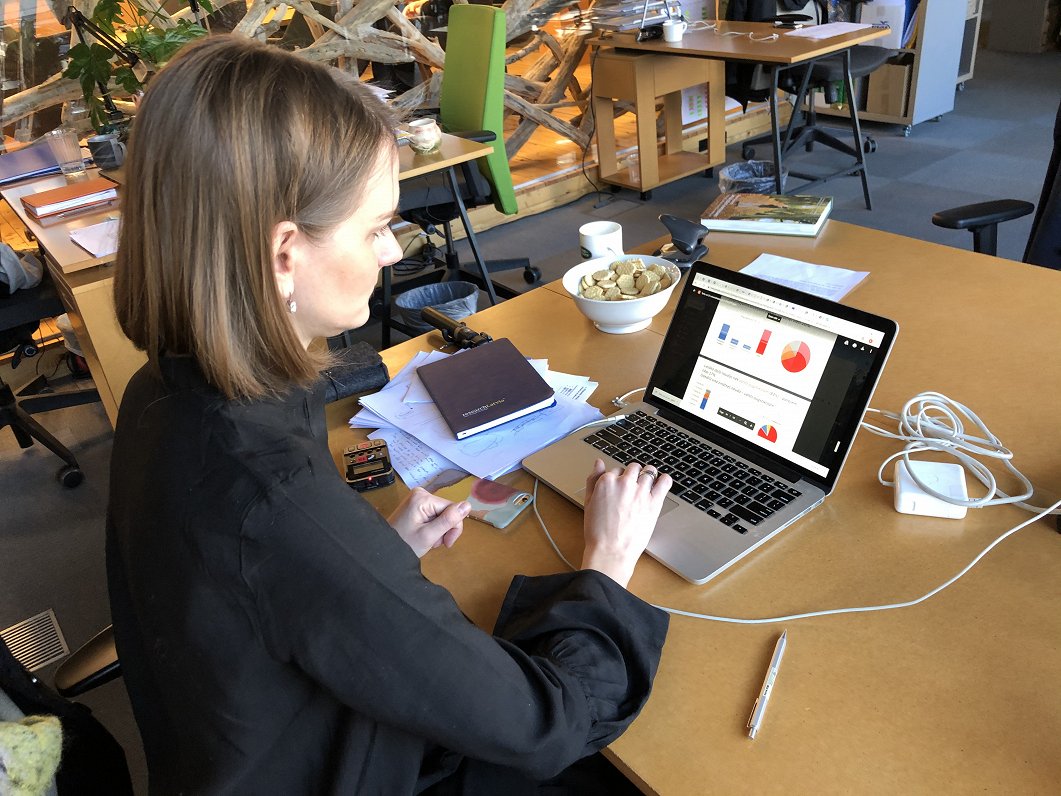 Instead of job ads - talk about your value

Dambe chose to talk to people who might be interested in her experience, rather than comb through job ads. Although uncertain at first, she quickly learned that many people are interested.

“What I would suggest to others as well – go and talk to people, tell them about yourself, don't wait for someone to send you a specific employment offer, said Dambe.

Right off the bat her data and process analysis skills helped several of her brother's “Plecs” foundation projects. Dambe just began working on a project in cooperation with the Welfare Ministry on creating a modern, effective data system that can be used to help children who need government support.

The economist also holds lectures where she shares her economic policy and behavioral economics experience. She also searches for like-minded people who are interested in creating fact and analysis-based policy in Latvia.

“We talk about a lot and ask for a lot of, for example, ministries – please give us data-based solutions! -, but we don't  give them people who can help,” said the economist.

She admits with a smile that many of her meetings at ministries and other institutions end with job offers, however at the moment Dambe has other plans with her brother. They want to create a “think and do tank” where people would learn from the best examples of children's, family and education policy and data, offering evidence-based innovative solutions.