38% of Latvian population say they will refuse vaccination, study shows

According to a survey conducted by pollster SKDS on behalf LSM, only half of 1,117 respondents said they would be willing to vaccinate when the possibility comes.

Fifty percent of all respondents in the SKDS survey stated that they are ready to be vaccinated when the opportunity arises (this is certainly not enough to achieve the goal set by the government - to create collective or 'herd' immunity in society). 38% of respondents stated their intention to refuse vaccination, while 12% of people were not able to provide a specific answer.

There was a slight difference along ethnic lines. Among those who speak Latvian at home, 58% are prepared to vaccinate against Covid-19, while of those who speak Russian, only 37%. There are also differences between other groups, but they are most pronounced in terms of language.

According to the survey, the reason so many people remain reluctant to have a jab is that they lack reliable information and that they are very dissatisfied with government work.

1. Most believe Covid-19 virus is not a fake

It turned out that only 9% believed that neither the Covid-19 virus nor the epidemic exist, another 8% had difficulty answering, while 83% disagreed with this claim. This position is typical for virtually all the groups covered by the survey.

The proportion of those who deny the existence of the virus among Latvian and Russian speakers is similar – 8% and 11% respectively, but on the Latvian side there are fewer people who had difficulty answering – 6% against 12%. Accordingly, there was also slightly more confidence among the Latvian-speaking population that the virus and the epidemic are real, 86% against 77%.

Only 29% of those who deny the existence of the virus had basic education, suggesting that it is not only those lacking education who believe in a grand conspiracy theory. 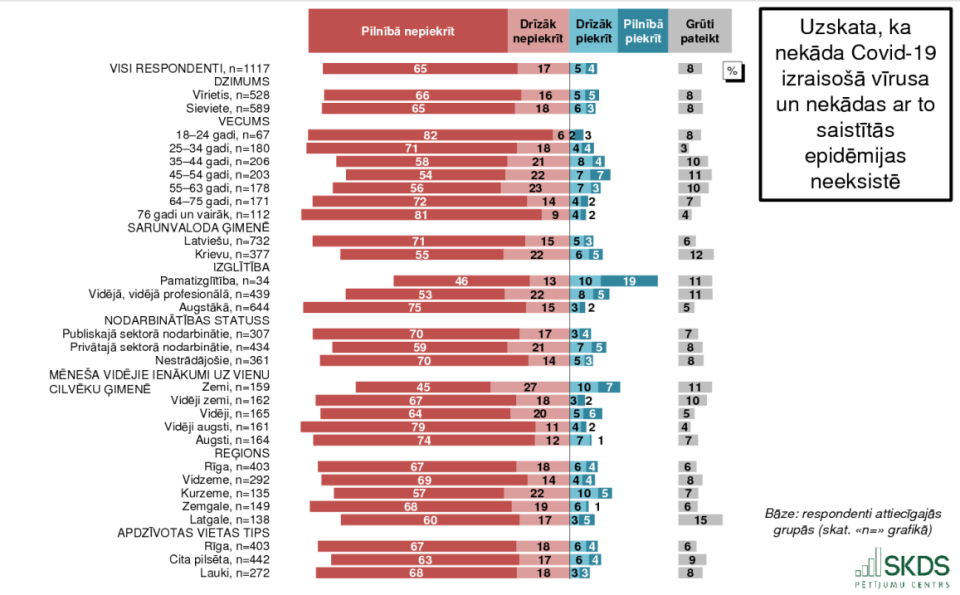 A much larger variety of views was revealed when sociologists asked respondents about their perceptions of coronavirus hazards. 32% believe that the virus contagion is exaggerated, but the severity of the disease seems to be exaggerated for 28%. Respondents from the older risk group regard Covid-19 as more dangerous.

The survey shows that respondents are more afraid of infecting their relatives than of getting sick themselves.

Analyzing populations who are more afraid to catch the disease,  34% of those with high incomes are not afraid of becoming infected. “Possibly it involves better living conditions – such as your home, personal transport, more opportunities to order groceries and other goods on the internet with home delivery, etc. However, protecting relatives from disease concerns this group, and very much – the level of concern in this group is one of the highest, 88%,” said head of SKDS Arnis Kaktiņš.

51% of respondents with primary education say they are not afraid to get infected and get sick, while this figure is only 23% among those with higher education. 57% of respondents with basic education think Covid-19 is no more infectious than seasonal flu, and 54% think the disease is no more severe than the flu. 51% of those with basic education do not see  the risk of infecting others. A similar position is also for the group with the lowest incomes.

“However, it should be borne in mind that education and income levels in Latvia are fairly interlinked, as residents with lower education levels are very often in lower income groups. Therefore, very much here we are talking about the same population group,” said Kaktiņš.

In the survey, the highest readiness to be vaccinated is demonstrated by people with the most serious attitude toward the disease: 56% of respondents over the age of 76 said they intended to vaccinate when this possibility arises, 18% said they are likely to do so. The youngest group (18-24) are also likely to vaccinate, at 61%. The average of all respondents was 50%. 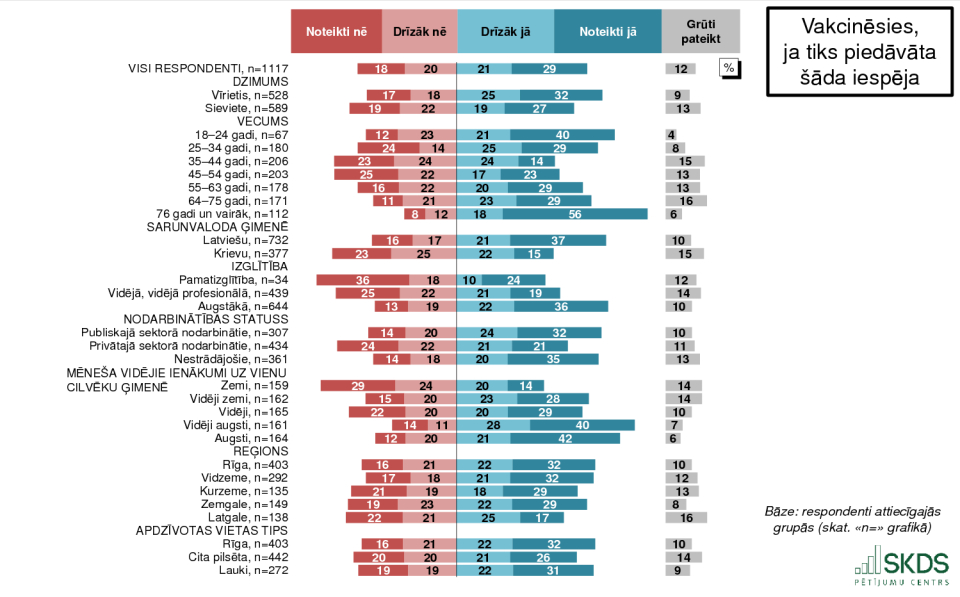 3. Some plan to refuse vaccination

The smallest percentage of those ready to vaccinate is among those groups who have the most relaxed attitude toward the disease. The same link with education and income level is observed: among those who have basic education, only 24% intend to vaccinate, whereas 36% plan to definitely refuse. These figures are respectively 14% an 29% among those with low income level.

4. People doubt the safety of vaccination

Only 46% of respondents agreed that vaccines against Covid-19 are safe and would not harm their health. This percentage is larger in the age group above 76, at 71%, and lowest in the group of people with low incomes (28%).

Among Latvian speakers, 55% think that vaccines are safe, while in Russian speakers this figure is 30%.

In all groups, there are more of those who are ready to vaccinate than those who think vaccines are safe. 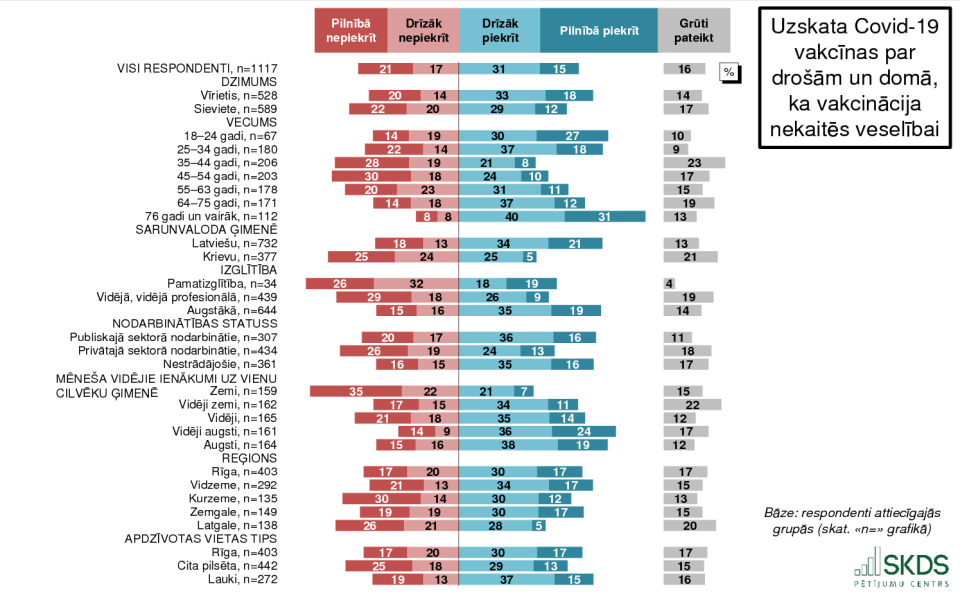 The answers showed a lack of information: the proportion of people who considered their knowledge to be sufficient did not reach 50% in any group.

In individual groups, the proportion of those who lack information is nearing three-fourths, and these groups coincide with those who were skeptical about the hazards of the virus and had negative attitudes to vaccination.

71% of Russian-speaking respondents (and 62% of Latvian-speakers) say they lack information about vaccines. Among low-income people, this percentage was 70%.

Overall, 60% have agreed to the statement of lack of information and only 35% have expressed opposing views. 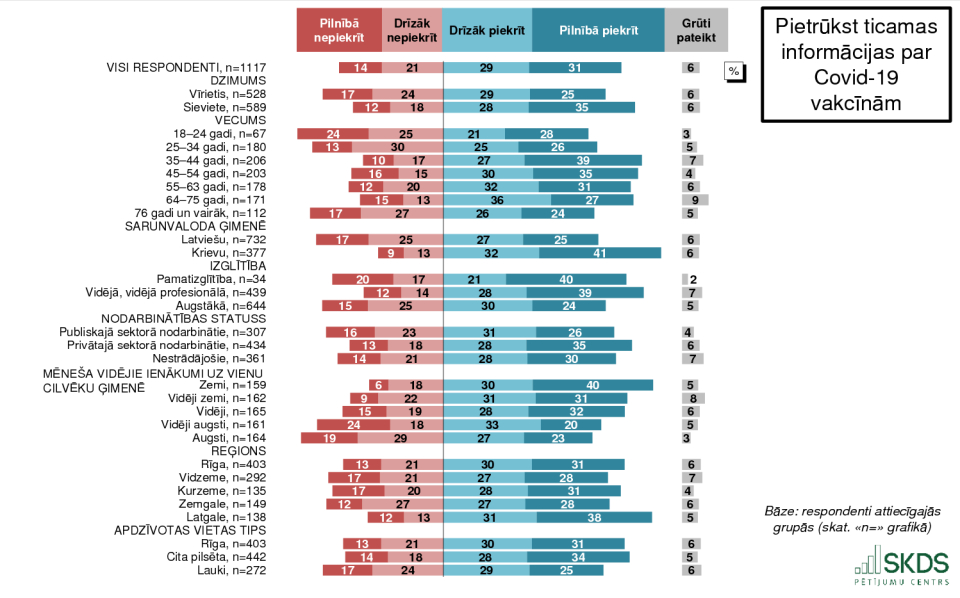 Respondents assessed their knowledge of the virus and the epidemic slightly better.

“I think that the reason why people on average feel more knowledgeable about the virus than vaccines is related to how long each of these topics is on the agenda of mass media and at the center of attention,” Arnis Kaktiņš said. “If information about the epidemic and virus from all possible channels has been bombing us intensively for ten months, then vaccines, as a special topic, have been there only for a relatively short period of time.”

6. Where do people acquire information?

The main sources of information for participants in the study, regardless of the language spoken at home, are Latvian media, according to the answers to the relevant question (up to three options could be chosen). Some language-related nuances appear.

Among Latvian-speaking respondents, Latvian media (TV and radio) was used most (82%), Latvian portals (81%) and social networks (42%) were included at the top of the information sources. All other possible sources were mentioned less frequently.

The Russian-speaking sources were more varied. Most often, respondents mentioned Latvian portals in Russian (61%). Latvian portals (39%), social networks (37%) and Latvian media (radio and TV), which broadcast in Russian (33%). The proportion of Russian media based in Russia proved to be relatively small – 17% mentioned Russian television and 10% – Russian Internet portals,

7. What the public thinks about government work in the context of the epidemic

Only 3% of all respondents assessed government work to curb the epidemic very positively, as opposed to 26% very negatively. People of pre-retirement age were the most critical. This group contains the largest proportion of negative and very negative scores (73%) and the lowest positive score (20%). Russian respondents (72% and 18%) and people on low incomes (71% and 24%) provided similar answers. Latgale stands out among the regions – the highest percentage of negative ratings and the lowest percentage of positive ratings (65% and 27%).

The most favorable attitude has been demonstrated by two age groups who have previously shown themselves as “vaccination enthusiasts”, those under the age of 25 and those over the age of 76, and older people have been the only group of respondents in which more than 50% of respondents think government work is positive.