february 10, 11:26
Society
Authors: Edgars Kupčs (Latvijas Radio Ziņu dienesta korespondents), eng.lsm.lv (Latvian Public Broadcasting)
Latvia's Fishing Act explicitly states that there is ten meter wide "belt" along the shores of public lakes, which must be left open to the public. In addition, the law also explains that the location of the belt changes along with natural changes in the waterline.

But on the banks of the Great Baltezers lake - which has some of Latvia's most exclusive and expensive properties on its shores due to its picturesque aspect and proximity to Rīga - landowners have a different opinion, and with the apparent blessing of Garkalne council, they have erected fences along the shores of the lake, essentially preventing public access, reported Latvian Radio February 10.

The shores of the Great Baltezers lake are markedly shallow and in many places overgrown with reed beds, at during this time of year the water level has risen. The lake straddles the territories of two municipalities - Ādaži and Garkalne. The differences between the two administrative areas are significant - the Ādaži side shows a wooded landscape, while in Garkalne the lake shore is divided up by privately owned fences.

Inese Bartule, deputy director of the Fisheries Department at the Ministry of Agriculture, explains that Article 1 of the Fishing Act defines a belt zone as a land area along the coast of a body of water and intended for fishing or boating activities, as well as for pedestrian access. The law stipulates that the belt runs along banks of rivers and lakes, starting from the normal waterline. Pedestrians should be able to move freely in the ten-meter belt zone at any time of the year. 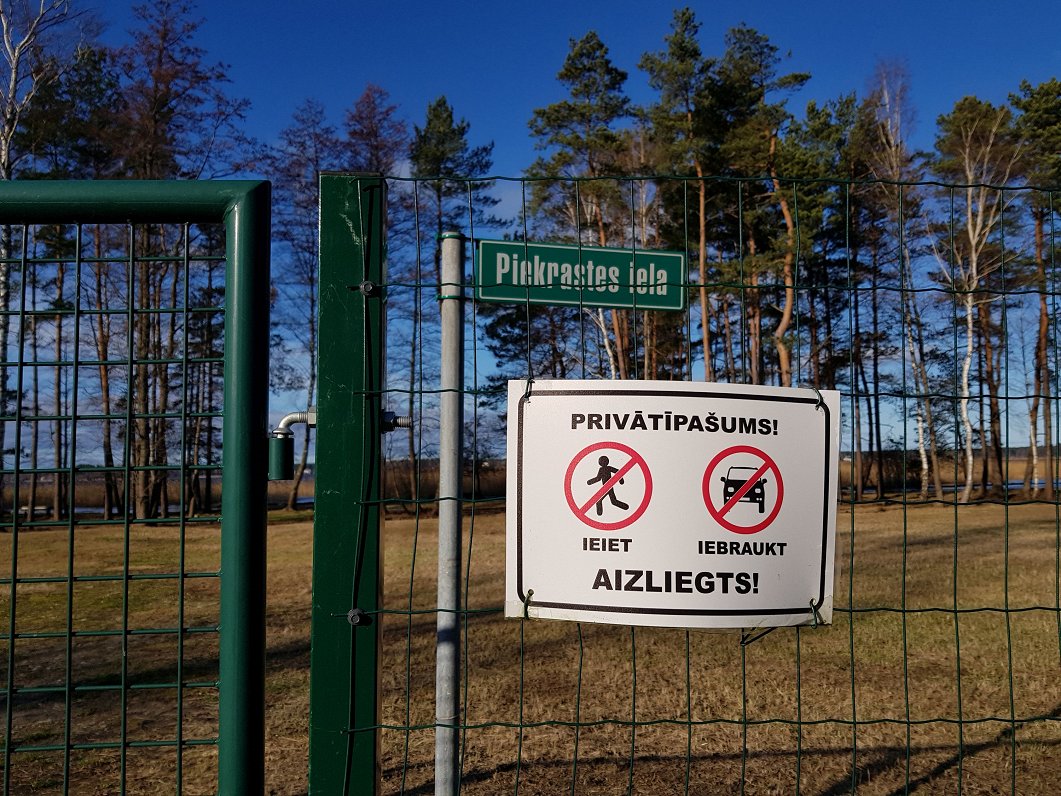 Latvian Radio gave numerous examples of places where access to the water is impossible because of the erection of private fences in this well-heeled district, while Inese Bartule confirmed that it is the duty of local municipalities to enforce planning rules.

Some time ago, the fight against the fencing of the property in question was started by neighboring Tomass Rubulis: “We stated from the very beginning when this fence was being built that neither the ten meter belt nor the fifty-meter width of the protection zone [where additional building restrictions apply] was being observed. Because within fifty meters, which is the protection zone around Great Baltezers Lake, you can build absolutely nothing. It is not possible to build fences with concrete posts in the ground, as the owner has done in this case."

But Garkalne Council interprets the belt in its own way. Janis Dambis, the head of the building board, gave a written response to residents in January who had complained of the erection of a fence at the Zvaigznīši property. According to the letter, municipal experts marked a mid-level reference point for the lake, and that this was what the council used to decide where the belt was located.

“The Zvaigznīši property does not have a fence along the border, as it is located more than ten meters from the lake mid-level reference point. The Building Authority finds that the information received regarding the location of the fence in the belt zone has not been confirmed, so there is no reason to initiate administrative proceedings regarding the arbitrary construction of the fence," wrote Dambis.

The current Mayor of Garkalne, Guntars Kniksts of the Vienotība political party, agrees with his construction board.

“There have been problems, fences have been mixed up - from time to time the building board and municipal police check for such things. Already last summer, when the owner put the fence on his property, the Zvaigznīši property had the construction board's opinion that it met the statutory requirements," Kniksts points out. Opposition Member of Garkalne Council Inese Anderson of the National Alliance does not agree with the mayor. She also recalls that in other cases the court has already ordered the municipality to remove construction on the lake shores.

"I have also received information from citizens that they have reported to the Executive Director and also to the State Environmental Service about illegal dumping of construction waste in the belt zone... I very much hope that there will be a really fair decision here, and that it will set a precedent for everyone else not to break the law,” Andersone says.

Meanwhile, on the other side of the lake in Ādaži district, Mayor Maris Sprindžuks of the Regional Alliance explains that the council has historically stated that no construction is allowed within the 50-meter protective zone. Ādaži wants the shores of the lake to be green and also plans to make the shores of Great Baltezers more accessible to the public, by creating a trail along the shores of the lake.

Yet even here there have been some problems. One case in which the coucil is trying to get rid of the illegal construction of a gazebo on a luxury property within 50 meters of the shore has been held up because the owner was Uģis Magonis, a former high-flier at the state railway company who is being charged with large-scale corruption. While the case continues, the property's ownership status remains frozen.

Nevertheless, Ādaži's tougher stance against lakeside construction seems to have paid off with fewer cases of construction along the lakeside evident than in Garkalne.

Ilze Oša, Deputy State Secretary for Regional Development at the Ministry of Environmental Protection and Regional Development, on the Latvian Radio pointed out that residents can resolve issues regarding specific unlawful construction by challenging and appealing the respective decisions. "The ministry is often limited in its actions because such individual decisions cannot be influenced. It is a matter of administrative process. We do what we can - we always get involved in responding to citizens' complaints," she said.