november 7, 2019, 17:46
Saeima
Authors: eng.lsm.lv (Latvian Public Broadcasting)
On Thursday, November 7 the Law On Administrative Territories and Populated Areas was passed in the first reading by members of Saiema. According to the law, 39 municipalities will be created in place of the current 119 local municipalities by the next local elections.

Votes for the law were cast by 70 members of Saeima. Members of parliament will once again have to vote on the law during the second and third readings. Proposals for the second reading can be handed in by December 18, 2019.

"The reform has to happen. Without it, there won't be other reforms," stressed Regional Development Minister Juris Pūce (Development/For!).

"Without the reform services will be worse for residents in the future, there will be less development. With the reforms we can ensure all residents receive commensurate public services," said Pūce.

Former Prime Minister and current opposition member Māris Kučinskis (Union of Greens and Farmers) was also critical of the reform, asserting that new map prepared by the Ministry for Environmental Protection and Regional Development doesn't solve many issues. "During this time a lot has changed. People have adjusted to each center. We haven't been able to find effective tools for maintaining jobs in the larger cities, because people from the rural territories go to the centers to find employment," says Kučinskis. 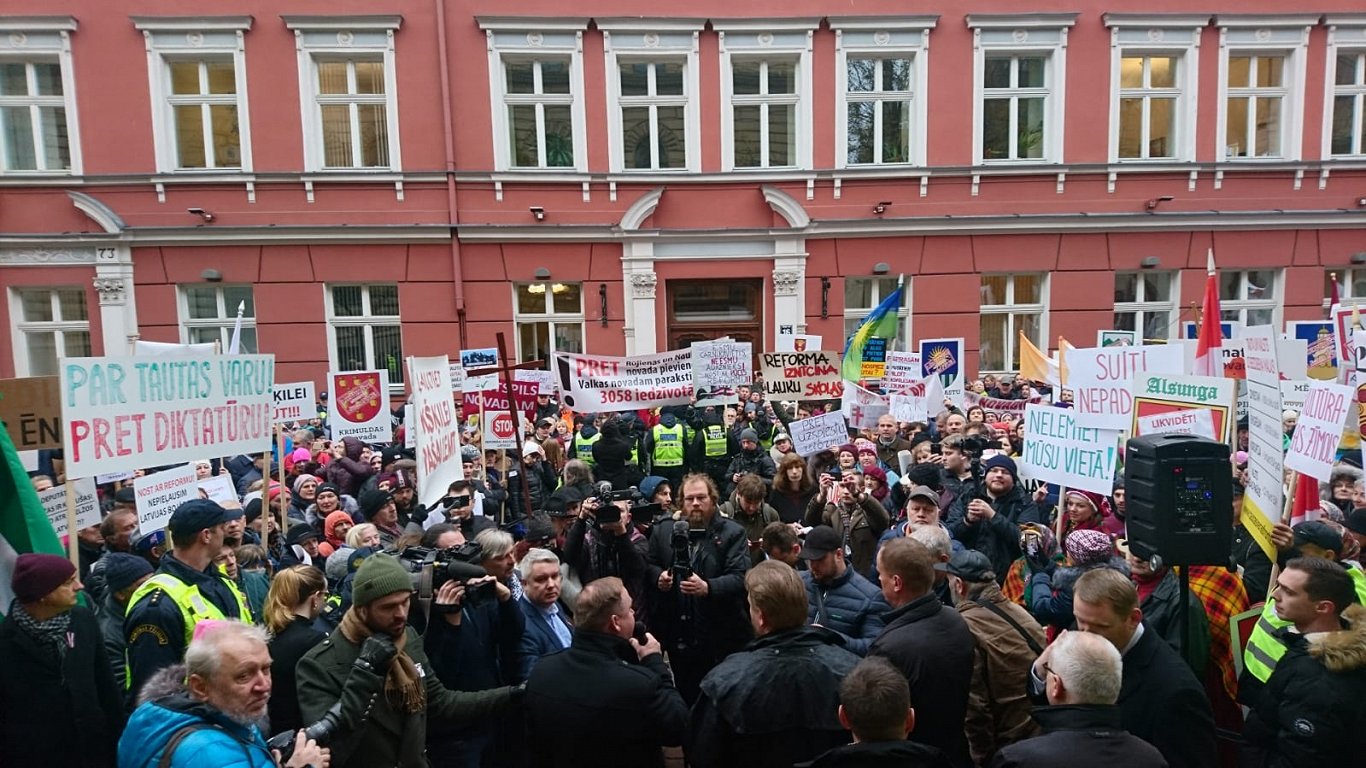 On Thursday pickets were organized in front of Saeima by both medics and regional reform protesters.

The protest campaign, or "people's assembly" was organised by the Latvian Green Party and the Latvian Association of Regions, in whose views the reforms have been rushed.  Their goal was to restart qualitative consultations with residents to gain an expanded and reasoned arguments for the economic goals of the reforms, and a calculation of benefits.

Minister Pūce came out to address the picketers. He emphasized that he has met and continues to meet with residents and local authorities: “I'll meet with everyone who is interested and ready to plan a meeting.” He also pointed to the Saeima commission promise to also consider resident proposals regarding the reform. “Thanks for coming, I hear your opinion,” added Pūce.

Meanwhile protesters whistles and chanted "down with Pūce" and "let there be countryside". From time to time the appeal to "dismiss Saeima" could be heard.

As previously reported, on October 16 the Cabinet of Ministers approved the Environmental Protection and Regional Development Ministry proposal to create 39 municipalities in Latvia instead of the 119 existing ones as part of the planned administrative-territorial reform.

The Environmental Protection and Regional Development Ministry's proposal was unanimously backed by all Cabinet ministers, while the Latvian Association of Local and Regional Governments maintained its objections to the reform.