Latvian resident Alvis Beketovs, who has been sentenced to prison for sexual abuse against a minor, has been enlisted among Europe's most wanted criminals, State Police said October 27.

Two minutes is the average timespan the police receive a report on sex crime in the EU, be it rape, sexual abuse or assault. This year, European Network of Fugitive Active Search Teams (ENFAST) 's annual European campaign for the most wanted criminals, launched in cooperation with Europol, places emphasis on the search for sex offenders. Along with criminals from 19 other Member States, Alvis Beketovs from Latvia is also being sought. 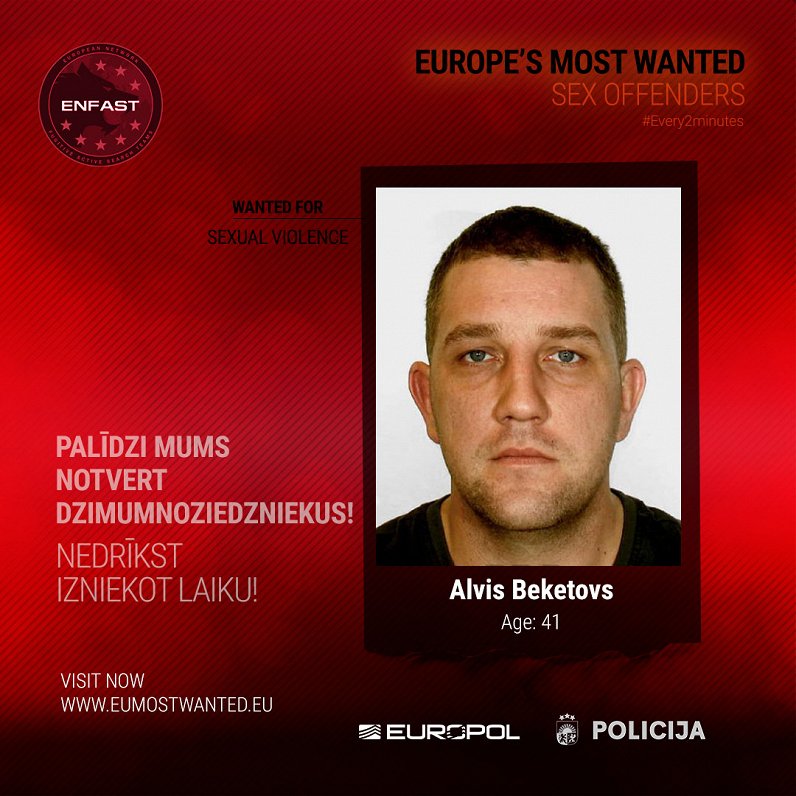 Everyone can be the victim of a sex crime attack, but women and children are the most likely to suffer. In order to facilitate faster detection and capture of sex offenders, 19 countries - Belgium, Bulgaria, Croatia, Cyprus, Denmark, Finland, France, Germany, Italy, Latvia, Lithuania, Luxembourg, Malta, the Netherlands, Poland, Romania, Spain, Sweden and the United Kingdom - are participating in the campaign, each putting forward one of the most sought-after criminals from their country. Photographs of all these criminals are available on the European website of the most wanted criminals: eumostwanted.eu.

Alvis Beketovs from Latvia, born in 1979, has been sentenced to 11 years of imprisonment for sexually abusing a minor in 2015 and his European arrest warrant has been issued, requesting him to be arrested and handed over to Latvia for the purpose of executing the sentence. Beketovs avoids serving a sentence, and the police don't know his current whereabouts.

The eumostwanted.eu website accepts any information anonymously about the criminals being sought and hands it over to investigators.

Previously, the information provided by citizens has produced results: 91 criminals have been detained since the start of the project in 2016. In at least 33 cases, criminals were captured owing directly to information received from the public.