august 6, 12:05
Health
Authors: eng.lsm.lv (Latvian Public Broadcasting)
Data published by Eurostat on August 6 shows Latvia has more drownings per head of population than anywhere else in the Euopean Union.

Based on 2017 data, around 5,100 deaths of European Union (EU) residents were caused by accidental drowning and submersion.

At the opposite end of the scale, landlocked Luxembourg did not record any deaths at all caused by accidental drowning and submersion, while the lowest rates were observed in Malta (0.4), Italy and the Netherlands (both 0.5), none of which are lacking in water sources.

In the vast majority of countries with available 2017 figures, the death rates were higher among men than among women. The difference between the rates of deaths among men and women was the most significant in Latvia (9.8 for men and 2.0 for women) and in Lithuania (8.5 for men and 1.9 for women).

In absolute numbers, the largest number of drownings was recorded in Poland (644) as against Latvia's total of 109. Of that number 86 victims were male and 23 female. 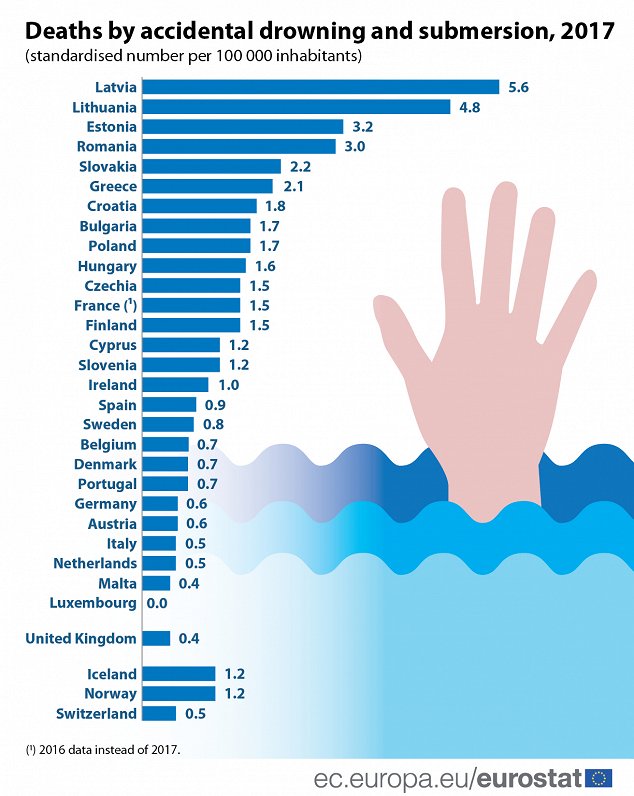 These statistics on accidental drowning and submersion are based on the International Classification of Diseases and Related Health Problems (ICD) and concern deaths that occur either in, or following, a fall into a bath-tub, swimming pool or natural water such as a lake, open sea, a river or a stream. In order to make comparisons between countries, the number of deaths have been standardised to take into account their different sizes and age structures.

Though shocking, the figures do not come as a surprise. Concerted public information efforts are currently being made to persuade the Latvian public to be more responsible on, near and in water, with President Egils Levits lending his voice to the call and medics decrying the unnecessary death toll.

The State Fire and Rescue Service (VUGD) has already pulled 80 bodies from the water this year, but even this figure does not account for all the drownings so far.